Tecovas Wins Hands Down In Its Own Not-So-Comparative Ads 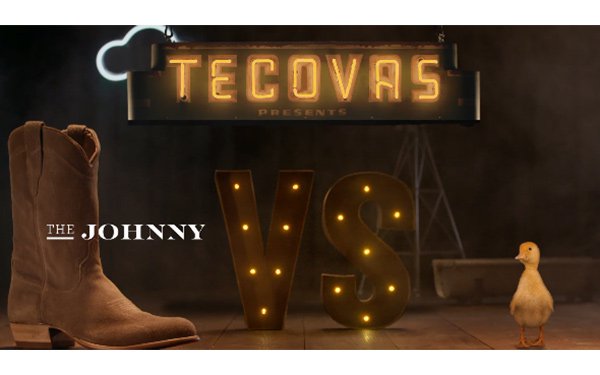 D2C cowboy boot brand Tecovas is out with a new ad campaign from Greatest Common Factory that pokes fun at comparative advertising.

The “Versus” campaign compares the brand’s boots to items that mostly fall a bit outside of its competitive set.

In one spot the question posed is how does the Tecovas Bandera compare to a video call? Answer: “One’s got everything it takes to get the Job done. The other, just a lot jibber jabber.”

Another compares the Tecovas Cartwright to a six-pack: “One makes you feel like you can kick down a door, the other does too with an extra 1600 calories.”

The Johnny versus a ducking? “One repels water and makes the ladies swoon. The other, quacks.”

In all cases, the boot wins with “confidence and grit shipped right to your door.”

In one spot Tecovas’ Duke does take on the competition--that is if you consider fancy Italian-made dress shoes cowboy boot competitors. “One makes you feel like you could rob a stage coach. The other robs yours.”

“We’re contextualizing a place for boots in people’s minds,” said John Trahar, strategy lead at Greatest Common Factory. “The ads work within stereotypes and transcend them at the same time. They’re funny, so they can create a youthful boot brand that appeals to people who haven’t considered cowboy boots yet and still validates the aficionados.”

“We’re trying to update the notion of what cowboy boots are and can be,” said Rich Lesperance, CMO/general manager at Tecovas. “Our customer base is extending well beyond our country roots as cowboy boots become a fashion statement among self-determining young adults and urbanites. Whoever wants to come along for the ride is welcome.”

And the company says its core audience is growing. The last special edition python boot the brand launched last fall sold out in three hours. Lesperance attributes that success in part to what he calls “a hype machine” that Tecovas advertising has generated through two fan groups on Facebook – a private Tecovas Insider group that gets advance product information from the brand, and a public group called Tecovas Enthusiasts whose members post dozens of fashion photos with numerous comments daily. Some fans egg each other on to purchase new releases.

The latest ads will run across a range of networks, sites and social media platforms through the spring. Sample the work  here.