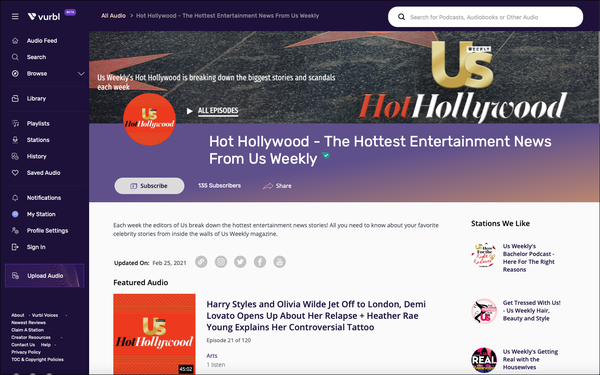 The arrangement will help a360 Media, which owns brands such as Us Weekly, Life& Style and inTouch, monetize its podcasts.

The company, which also owns health and wellness brands, as well as Surfer and Men's Journal, has formed an ad partnership with Vurbi, an audio-streaming platform, in an effort to monetize its podcasts.

Vurbl will stream embedded snippets, promos and playlists of a360 podcasts across the company’s web properties. In addition, it Vurbl will provide a360 with revenue on a360 Vurbl-hosted audio stations.

A360 offers the podcasts Getting Real With The Housewives , Hot Hollywood, Here For the Right Reasons, Watch With Us and Get Tressed.

Vurbi hopes to prove “there is more to podcasting monetization than the traditional native and dynamic-inserted ads in downloaded audio files,” states Audra Gold, CEO of Vurbl. “Publishers, bloggers and journalists have been including relevant images and videos in their posts for years, so it’s surprising that audio snippets were never a common part of this equation from both a journalistic and monetization optimization perspective.”

By “further incorporating short-form clips across our platforms, we can create new opportunities for our podcasts to go viral and further engage a broader audience,” adds Eli Lippman, GM, Digital at a360 Media.

The company says its journalists are now embedding snippet highlights from podcasts within their articles.

Digital properties for a360 Media reach 50+ million unique visitors and 652+ million page views per month, per the company.