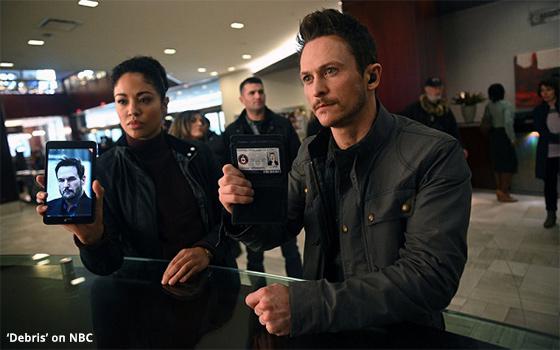 Both shows are concerned with the recovery of interstellar debris resulting from the crash-landing of alien aircraft.

In the premiere episode of “Debris,” airing Monday night on NBC, it is farmland and a residential neighborhood in Kansas where a debris field from a crashed spaceship draws the attention of federal agents who converge on the site in a motorcade of black SUVs.

In “Resident Alien,” which is now in the midst of its first season on USA, the site of an alien ship crash is a remote area high in the Rocky Mountains.

And the only being searching for this debris field is the alien himself who seeks to retrieve vital equipment from his wrecked spacecraft.

As we learned in an early episode of “Resident Alien,” at least one piece of that equipment possesses the power to elevate objects and people and then suspend them in midair.

Midair suspensions of a similar kind also take place in “Debris” after certain individuals come into contact with pieces from the wrecks of mysterious spaceships.

In addition, the interstellar debris in “Debris” has the power to revive the dead (in a way that is much too complicated to go into here).

In a similar vein, the titular character in “Resident Alien” kills a resident of the Rocky Mountain town where the show takes place, and then assumes the dead man’s identity.

When you stop and think about it, that is a lot of similarities for two different TV shows to have, especially two that have come along within just a few weeks of each other.

These three areas in which the two shows intersect, however, are the only ones. Most notably, “Resident Alien” has a darkly comic feel, while “Debris” is darkly tragic, a drama with a capital “D.”

This is too bad because the series premiere, which the TV Blog previewed last week, started out strongly as the show’s premise unfolded and the episode’s intriguing storyline began to take shape.

That story had to do with an illicit international trade in the very interstellar spaceship parts that the government agents in the show are trying to collect before the black-marketers do.

But then the episode veered suddenly into another story -- this one having to do with the tragic death in a car accident of a young boy, and how his mother’s grief was somehow harnessed by an alien life force to suspend various other earthlings unrelated to the boy in midair.

Yes, the show’s main characters -- mainly the two debris-chasing feds seen in the above photo (played by Riann Steele and Jonathan Tucker) -- did their darndest to explain this inexplicable phenomenon.

But it was much too complicated and the episode drifted into a moody, dead-end cul-de-sac of its own creation.

Perhaps in Week Two, “Debris” gets back on track, but the TV Blog has no information on that because NBC provided only the series premiere for TV columnists to preview.

And if it does not, there is always “Resident Alien,” available on USA Network and USA on-demand.