Are You An A-Lister? Prove It! Buy This RTD Cocktail Company 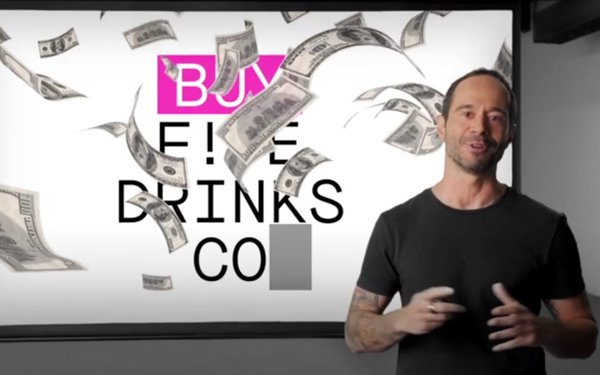 Five Drinks Co, a small company from Miami getting a reputation in the ready-to-drink cocktail segment, is also announcing it’s a player in the ready-to-be-sold market, too.

The ad campaign is funny. But the offer is for real.

In an ad launched digitally on Wednesday, Felipe Szpigel, the co-founder and CEO, puts the company up for sale -- to the right kind of buyer.

He asks, “Are you a celebrity? If you aren’t, skip this ad.”

The brand, launched in 2019, is using this playful, unorthodox campaign to build awareness, hoping to drum up earned media to sell some cocktails and/or find a buyer.

To do that, it went right to the marketplace where a lot of big stars search for meaning. Five Drinks Co. took out a full page ad Wednesday in the show-biz pub Variety.

It also dotted Los Angeles with other posters around town, and a digital moving truck display. The creative agency called Gut worked on the campaign.

A truckload of movie and television stars, athletes, rock stars and rappers have been selling their fame by the boozy caseload. George Clooney, Antonio Banderas, Drew Barrymore, Francis Ford Coppola, Sean Combs (Diddy), Sammy Hagar, Jay-Z, Greg Norman, Justin Timberlake, Brad Pitt and Angelina Jolie and Ryan Reynolds are among a very long list of stars who all own all or part of a brewery, distillery or winery, as they are often quick to point out on talk shows.

Szpigel asks in the ad,  “You don’t want to be remembered as the one Hollywood celebrity without a liquor brand. Or the twentieth celebrity to buy a tequila brand... Do you?”

Before Five Drinks, Szpigel headed Anheuser-Busch divisions that deal with craft beers and spiked seltzers. He started Five Drinks Co with four friends whose backgrounds ranged from  beer to advertising to the venture capital field.

On social media, non-celebrity consumers are invited to tag their fave celebrity in Five Drinks Co. Twitter or Instagram posts, and the company says if you’re the first to tag a celebrity who actually does buy the brand, you’ll receive a bonus check.

The Szpigel pitch to celebs lists reasons A-listers don’t really want to spend their valuable sun-tanning hours promoting their new brand, when there’s a good one already there just for the taking. “You can keep your acting talents for acting rather than shameless self-promotion of your liquor brand, like others,” he says in the ad.

Five Drinks will have already taken care of that.