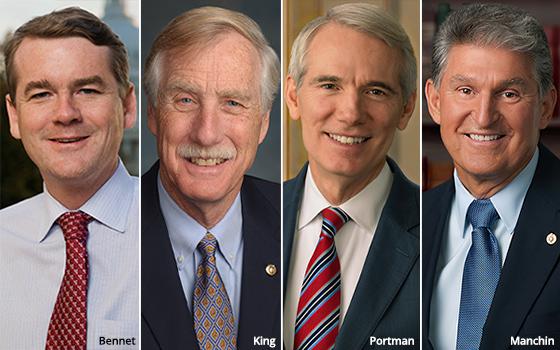 The federal government should encourage broadband deployment at speeds of at least 100 Mbps -- a fourfold increase from the Federal Communications Commission's current benchmark of 25 Mbps -- a group of U.S. senators said Thursday.

“The pandemic has reinforced the importance of high-speed broadband and underscored the cost of the persistent digital divide in our country,” Sens. Michael Bennet (D-Colorado), Angus King, Jr. (I-Maine), Rob Portman (R-Ohio) and Joe Manchin III (D-West Virginia) say in letters sent to acting FCC chair Jessica Rosenworcel and other heads of agencies.

“We must learn from our experience during the pandemic and raise federal standards for new broadband service to require low latency, high reliability, and speeds that meet our expected 21st century needs,” the lawmakers write.

“Ask any senior who connects with their physician via telemedicine, any farmer hoping to unlock the benefits of precision agriculture, any student who receives livestreamed instruction, or any family where both parents telework and multiple children are remote learning, and they will tell you that many networks fail to come close to 'high-speed' in the year 2021,” they write. “In the years ahead, emerging technologies such as cloud computing, artificial intelligence, health IoT, smart grid, 5G, virtual and augmented reality, and tactile telemedicine, will all require broadband networks capable of delivering much faster speeds, lower latency, and higher reliability than those now codified by various federal agencies.”

They add that the goal for new deployment should be speeds of at least 100 Mbps in both directions, with exceptions for hard-to-reach areas.

The lawmakers aren't alone in arguing that the standard for broadband should be revised upward. Last year, the trade group Incompas -- which counts online video providers like Amazon, Google and Netflix among its members -- urged the FCC to define define broadband as internet connections of 1 Gbps.

“Markets with gigabit connectivity not only have faster speeds, but also more affordable prices,” Incompas wrote in a filing with the agency. “The U.S. should be adopting benchmarks that reflect truly 'advanced' telecommunications capability, not settling for baseline speeds.”

Consumer advocacy groups have also urged the FCC to revise its definition of broadband.

The FCC's Rosenworcel has argued in the past that the FCC should define broadband as service with speeds of at least 100 Mbps.

“With many of our nation’s providers offering gigabit service, it’s time for the FCC to adjust its baseline upward, too,” she stated last year.