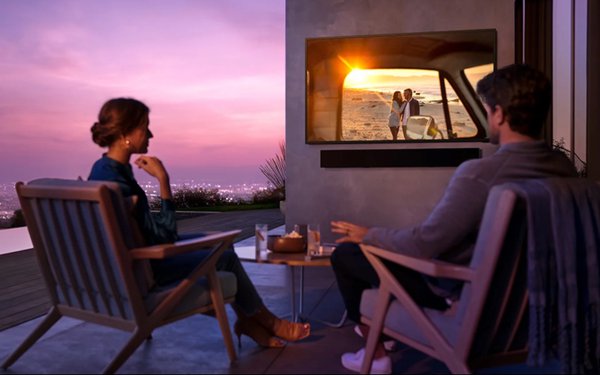 Foremost among them is a new 75-inch version of its Terrace TV, that, as the name suggests, is designed for outdoor use. It is water- and dust-resistant and features anti-glare technology. it’s getting some attention because Samsung is pitching it as a set for consumers who are spending more time watching TV and might want to do it outside rather than in, after a year of couch-potatoing indoors and more time to worry about what danger lurks inside their own homes.

Not mentioned, but no doubt relevant, is that as more American households cut the cable cord and use streaming devices instead, only the power cord is needed to connect content in homes with wireless WiFi to an outdoor set.

The Terrace is not brand-new. Samsung made two smaller versions previously, and one of those was named one of Oprah’s favorite things back in 2020.

But it’s being pitched for these peculiar times. “Ideal for pandemic-era outdoor entertaining,” wrote a product reviewer for the website Dealerscope last week. That’s particularly true if that party animal is ready to part with $3,500 -- the list price.

Samsung is also updating its existing Sero line of sets. The Sero, as peculiar as it may sound to a viewer who expects TV presented horizontally, comes with a vertical screen instead, to accommodate viewers now fully accustomed to watching TV in portrait mode on their smartphones.

But wait. It can twirl to become a horizontal screen, too.

That vertical  trend “literally changed the face of video,” Samsung’s video hype reel says, and led to the Sero.  Users tap their phone that’s playing a video to the Sero screen, and it mirrors to the TV screen.

Samsung will also provide another chance for smartphone users to translate content from phone to home. It announced it will soon make TikTok videos available on its sets.