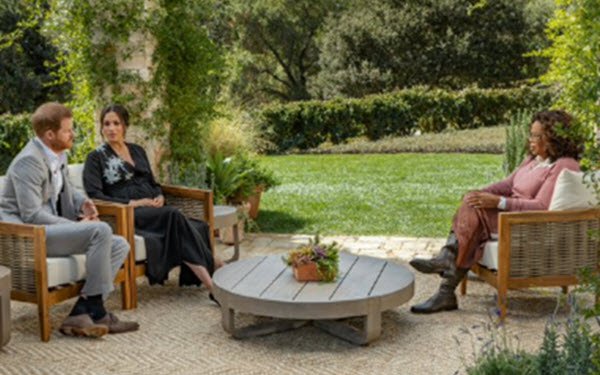 For all of ViacomCBS’s investment in transforming CBS All Access into Paramount+, and heavily promoting it to drive sign-ups, subscribers to the new service cannot call up a replay of the CBS network’s blockbuster Oprah Winfrey interview with Prince Harry and Meghan, Duchess of Sussex.

The interview was available for livestreaming on Paramount+, and will be available on CBS.com and the CBS app for the next 30 days, but it’s not a Paramount+ VOD offering.

Why? Winfrey’s Harpo Productions owns the special’s streaming rights, according to knowledgeable sources who spoke to The Verge’s Julia Alexander and Variety’s Kate Aurthur.

“As of last year, Prince Harry and Meghan Markle have a multi-year deal with Netflix, and in 2018, Winfrey made a deal with Apple TV+. It appears those deals precluded Paramount Plus from being able to stream what will likely be one of the biggest programs of the year, showing the complexities of the streaming wars,” reports Aurthur. (Representatives from Paramount+, CBS and Harpo didn’t respond to Variety’s request for comment.)

“Imagine launching a streaming service, having a wildly popular interview that same week available only through your streaming service, and then having the interview disappear from your platform entirely the second it’s done airing,” tweeted Vulture’s Kathryn VanArendonk.

While the entire world is saying “we want to watch the Oprah interview,” the top-trending show on Paramount+ is Spongebob Squarepants, she added.

Paramount+ subscribers — particularly the potentially large number who signed up for a free trial because of the touted access to the interview — were not amused. Sample tweet: “I literally downloaded paramount plus specifically because google said the Oprah interview would be on there and it’s not (sad emoji) how can I watch it? Was it just on live and gone forever???”

As for industry observers, screenwriter Andrew Ungvari summed up the general disbelief and dismay this way: “Viacom not debuting the Oprah interview on Paramount+ the week of its launch might go down as one of the biggest blunders in TV history.” Others were ruder.

However, as Alexander points out, if CBS had passed on the interview over the VOD issue, Harpo could have just gone to another network. And, at least based on a Google Trends search and scrolling through Twitter, “people did sign up for Paramount+ through the free trial for the interview,” she adds. “The question is whether or not people will stick around after those initial seven days.”

CBS also cleaned up on advertising, commanding $325,000 for a 30-second ad on the special — with additional ad revenue being realized through the ad-supported CBS site and app. Some agency sources estimated that the network may have made up to $19.5 million for more than 50 commercials.

Most important, as it turns out*, the underlying story is that Harpo "envisioned the special as something suited to a big broadcast network" in order to maximize its live audience, according to New York Times sources, who report that Harpo "did not even attempt to sell the streaming rights to Netflix or Paramount+," and that the special won't appear on any streaming service.

Winfrey's deal to produce programs for Apple TV+, and Harry and Meghan's deal with Netflix, did factor into the broadcast-only strategy, according to the Times.

In addition to the advertising windfall, ViacomCBS won rights to broker the special's international distribution on behalf of Harpo. Following its debut on Britain's ITV on Monday, it will be available in more than 80 countries.

On Tuesday (March 9), CBS also announced that it will rebroadcast the interview on Friday, March 12 at 8 p.m. EST -- giving Paramount+ subscribers and others who missed the first live broadcast another chance.

However, the Oprah interview wasn’t Paramount+’s only missed opportunity within the first week of its launch.

The launch of Paramount Pictures’ “Coming 2 America” on March 5 — the same day that Paramount+ launched — drove the top opening weekend of any film launching on a streaming service in the past year, according to Screen Engine/ASI.

“Coming 2 America” could have been used to bring in subscribers for Paramount+, as ViacomCBS is doing with other new movies, like “A Quiet Place” and “Mission Impossible 7,” which “are leaving movie theaters early and landing on Paramount+ just 45 days after release,” notes Alexander.

Instead, ViacomCBS “wound up competing with Amazon for attention,” during Paramount+’s launch weekend. “Not having the movie is one less reason for people to sign up for Paramount+.”

ViacomCBS made some cash last fall by selling rights to several finished movies that were languishing because of the movie theaters crisis, and Paramount+ was still in development.

Still, “Coming 2 America” certainly could have been held for the Paramount+ debut — and stayed on the service to support subscriber retention rates. That’s what makes the decision to sell the rights to Amazon instead “even more confounding,” Alexander stresses.

The point here isn’t to rag on ViacomCBS, so much as to note  that rights, which have always been one of the trickiest and most strategically critical parts of the entertainment business, are likely to prove even more complex and challenging with a slew of new streaming platforms and studios striking distribution and production deals thrown into the mix.

*Updated with information from new reports.