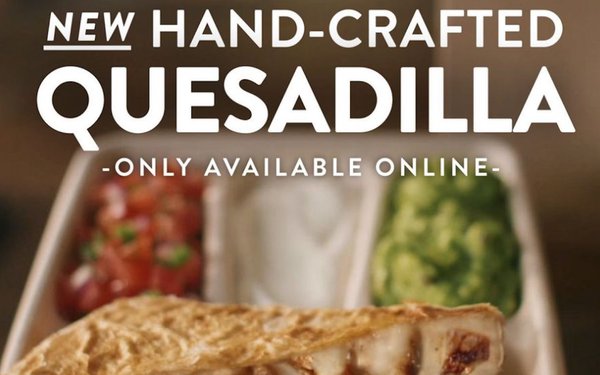 It’s rare that a QSR’s stock gets a nice bump from a single menu introduction, but that’s what happened Tuesday for Chipotle Mexican Grill.

The stock rose rose 7% to $1,427.61 when Cowen Inc. and other financial firms upped their expectations for Chipotle following the chain’s announced launch of a quesadilla that will be a digital-only menu item—available only for carryout or delivery.

As Chipotle’s first customizable menu item since the company introduced salads 17 years ago, the quesadillas will be available for pickup or delivery at more than 2,000 of its U.S. locations via the chain’s app or website.

“We see no reason why quesadillas can't deliver a 3%-4% sales lift” based on input from other fast-casual, Mexican restaurant operators, wrote Cowen Inc. analyst Andrew Charles.

Last summer, Chipotle tested the quesadilla as a digital-only menu item in Cleveland and Indianapolis to gauge customer reaction. It became “one of the most talked about Chipotle menu items on social media,” the chain said in a news release.

The menu add comes as same-unit sales, digital orders and loyalty program signups have soared for the California-based QSR.

“So you've got twice the amount of people that we can influence behavior with on a pretty one-to-one basis,” Chipotle chairman and chief executive officer Brian Nichol said during an earnings call with investors last month.

In the fourth quarter, comparable-restaurant growth was 5.7%.

The first quarter of 2021 “has also started on a very positive note, with comparable restaurant sales for January accelerating to around 11%,” Nichol noted.

As of Feb. 2, “a few Chipotle restaurants” remained fully closed “while only about 60% of our dining rooms are open with reduced capacity, with the rest being available for to-go services.”

According to place-based data provider Placer.ai, year-over-year weekly visits to Chipotle were down 37.1% the week of Jan. 18, before dropping 41.7% the week of Feb. 15 and recovering to minus-28.4% the week of March 1.

As for other menu innovations, in January Chipotle launched plant-based Cilantro-Lime Cauliflower Rice for limited time across the U.S. and Canada.

While Chipotle does not yet offer nachos, it does have a do-it-yourself “menu hack” on TikTok that explains which nacho components can be ordered and how to prepare them.

Cowen’s Charles believes that “quesadillas will be Chipotle’s first digital menu innovation, but not the only one, as we view nachos as the next most obvious innovation.”

Asked about that prediction, a Chipotle rep tells Marketing Daily, “We don’t have plans to add nachos to our official menu.”

Last month, Chipotle made its Super Bowl 2021 advertising debut—the first-ever move by the 27-year-old company—to amplify its support of local farmers and use of responsibly sourced ingredients.

It consisted of a 30-second spot from the Venables Bell and Partners agency titled “Can A Burrito Change The World?”