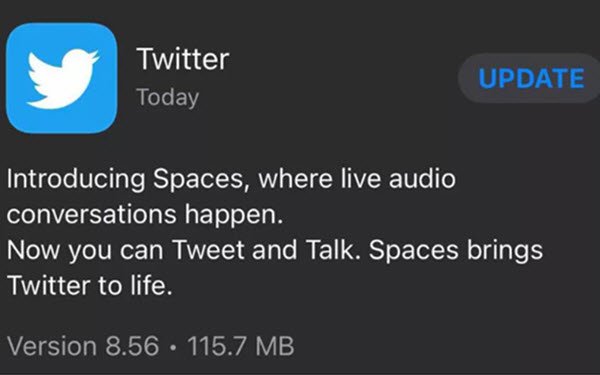 All Twitter users may soon be able to be hosts on Spaces, the company’s new new rival to the hugely popular audio chatroom Clubhouse.

Such a move should drive scale that could attract significant interest from advertisers.

Twitter is also reportedly working on enabling a tipping feature for Spaces.

Twitter launched a limited version of Spaces in iOS in January.

And unlike Clubhouse, in which joining is invite-only, any user of the Twitter iOS app has been able to join Spaces and listen in.

However, only a select few have been allowed to host their own Spaces.

Now — no doubt with the intention of getting a competitive leg up on Clubhouse — Twitter is planning to let all Twitter users host a Space.

“Twitter’s plans aren’t set in stone, but the gist is that they’re trying to get the product into a state where anyone can host a Twitter Space starting in April,” reports The Verge. “April is the goal."

Clubhouse has only about 2 million active users to date, so opening up hosting to Twitter’s 192 million users “could make Spaces a much more appealing option for broadcasters,” notes Social Media Today.

Exclusivity has appeal, and host selectivity has contributed to the quality of Clubhouse’s broadcasts. But maximizing advertising requires reach, and creators gravitate to large audiences for monetization purposes. So Spaces’ hosting move will put pressure on Clubhouse to consider expanding its own hosting eligibility parameters.

Twitter will need to tackle issues including discovery and how to highlight the most relevant, in-progress Spaces to users — and Twitter's algorithm “isn't necessarily that good at highlighting relevant topics of interest,” notes SMT.

Twitter is also testing a tipping feature for Spaces that would allow hosts to accept donations from participants through several different payment options. Again, such monetization would help the platform attract creators/hosts and build audiences.

There is no indication at this point as towhen a tipping feature might be rolled out.

The test was uncovered by developer Manchun Wong, who found the screens within the Spaces setup process, reports SMT.