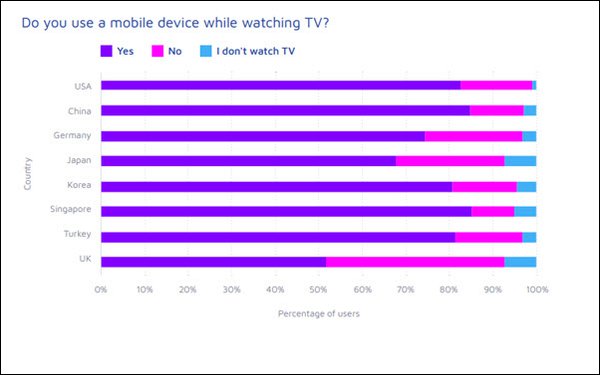 The habit of checking messages, texting and even watching videos on phones, while also watching TV, is even more pervasive than some might guess.

In the U.S. alone, the number jumps to 83% — although Singapore and China have us beat, with both at 85%, according to the research, conducted in November by global app marketing analytics platform Adjust.

This translates to a huge universe of consumers who can potentially be marketed to through use of phone-scannable QSR codes or other engagement methods — like downloading a mobile app in TV content… particularly CTV and addressable TV.

To leverage the second-screen marketing opportunity, marketers need cross-device measurement to properly attribute which channels result in the greatest mobile response, so they can adjust spend accordingly going forward, of course.

But some intriguing insights can be gleaned about second-screen behavior and user segments from the Adjust survey.

For example, among all countries studied, social apps are the number one choice for second-screeners — favored by 65.4% of respondents, on average — followed by banking (54.9%) and gaming (44.9%). 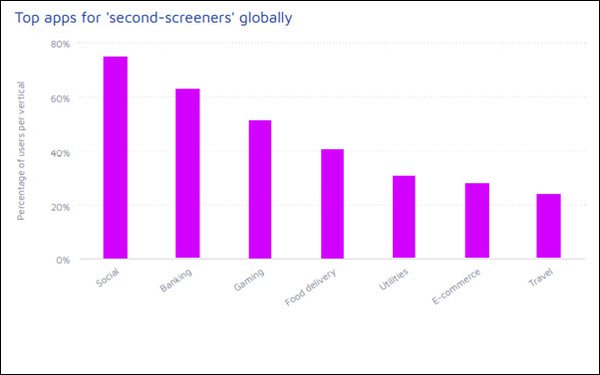 Here are the most popular types of apps among U.S. second-screeners:

Another tidbit: Asked which streaming services they “can’t live without,” 65% of the 215 U.S. smartphone users who responded to that open-ended question cited Netflix, 14% Amazon Prime Video, 10% Hulu, 4% Spotify, 3% Disney+, 3% YouTube, and 34% cited various “other” services.