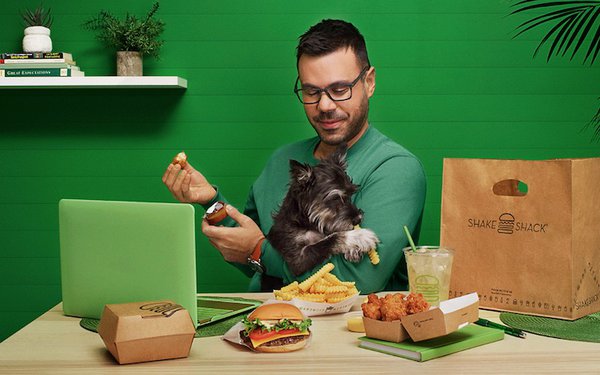 One year after COVID-19 began to crush foot traffic at Shake Shack Inc. restaurants, the chain is fine-tuning its digital prowess and winnowing third-party delivery options.

The move will give Shake Shack much more control over its customer data—one of many sources of friction between restaurants and third-party delivery services—while facilitating more precise and relevant targeting and messaging.

Later this year, the chain will expand the in-app delivery option to include the Android operating system.

Orders made within the iOS app will carry a delivery fee of 99 cents. There will be no fee for orders exceeding $35.

Shake Shack is promoting delivery with a campaign on digital platforms created by Confidant, and is offering free fries with every delivery order over $15 until the end of March.

Over the past year, the Manhattan-based chain has been hit particularly hard by the pandemic because many of its locations are in dense urban areas, and it hadn’t put much emphasis on delivery prior to the outbreak.

Why start with iOS?

“We are taking a phased approach to delivery in order to quickly establish key learnings across regions and platforms before going live across them all,” Shake Shack vice president of digital experience Steph So tells Marketing Daily. “We first launched our app in the iOS store in 2016, and we learned so much in those first few months of development before launching the Shack App in Android in 2017.”

As for the choice of Uber Eats as exclusive delivery provider, So adds, “We chose Uber for their ability to customize the experience for our guests and their strong courier coverage in our key markets.”

“The Android ecosystem is built for many different devices from various manufacturers,” says Rao.

“As a result, each manufacturer tends to install their own custom version of the [user interface and user experience]—resulting in a more fragmented ecosystem that takes a bit more work for developers to maintain, and a slightly longer lead time to build/ship products.”

In return, Uber Eats will be able to siphon customers from competitors “because [customers] will need to open an account with Uber Eats to get Shake Shack food delivered,” says Weberg.

A similar point was made by Randall Garutti, director and CEO of Shake Shack, during a Feb. 25 earnings call with financial analysts.

“We're still in the early testing phase but looking forward to the longer-term opportunity here as we target the migration of third-party delivery orders to our own channels,” said Garutti.