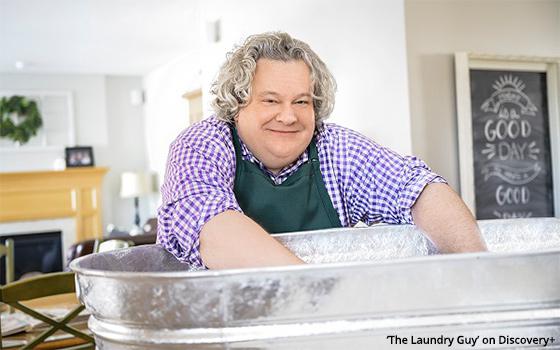 Most of us try and avoid airing our dirty laundry in public, but not “The Laundry Guy.”

Meet Patric Richardson, a cheerful Kentuckian who is so passionate about laundry that he has made a career out of teaching others how to clean their clothes.

Richardson (pictured above elbow-deep in a washtub) has apparently become so well-known as a laundry and garment-cleaning expert that he has been rewarded with his own TV show, titled “The Laundry Guy” and premiering on Discovery+ next week (on March 31).

It would be easy to react skeptically to the news that there is now to be a TV show about laundry. You might be thinking: So, this is what television has come to. Now we’re watching a guy do his laundry. Do we get to see him fold too? Or is that to be the subject of some future spin-off? (Pun on “spin cycle” not intended.)

But before you advance any further with that line of thinking, hold on there. In the half-hour episode of “The Laundry Guy” that the TV Blog previewed this week (of three that Discovery+ provided), the Laundry Guy star of the show is not seen in a laundromat or in his home loading his washing machine and then doing household chores as he waits to transfer his freshly washed clothes to the drier.

It is possible we might see him doing his own laundry in future episodes, while also instructing the rest of us on how to get better results when doing our own laundry.

But in the episodes Discovery+ provided, Richardson is seen visiting the homes of other people who present him with garments and textiles that have deep meaning for them, but are beset with age-old stains and other defects accumulated over the years.

In the episode that the TV Blog previewed, these items included a silk boxing jacket from Guatemala that dated back to the 1950s, and a homemade quilt that dated back even longer.

Richardson has a solution for every stain and every material. In the show, Richardson is seen genially applying his wide-ranging know-how to restoring both of them. After he is finished, they are noticeably whiter, brighter, and stain-free.

Richardson loves doing laundry too. On his show, his enthusiasm is infectious. He is so into laundry that he has developed his own philosophy around it.

“Clean clothes are a privilege,” he says in a press release from Discovery+ about his show. “While the methods have changed, some things never will. We wear our lives’ stories -- from first dates to wedding days to bundles of baby joy. When it comes to stains and the stories behind them, everything comes out in the wash.”