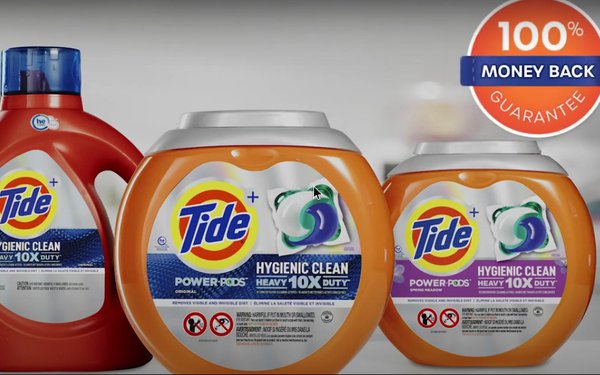 Tide detergent’s spring campaign aims to get consumers to wash their clothes in cold water, revving up efforts to get people away from the idea that hot water and suds is the way to go.

The company will partner with the Hanes apparel brand to push the cold-water angle on Hanes packaging.

The multiyear deal means the apparel brand will feature a “wash in cold” call-to-action on its packaging, along with coupons and product samples of Tide Pods. Hanes will emphasize the cold water wash will do a good job even on underwear, T-shirts and socks.

According to Tide, over two-thirds of all greenhouse gas emissions (GHG) involved in the entire Tide laundry lifecycle come from the consumer use phase.

That’s because 90% of the energy involved with a load of wash comes from heating water to do it.

The goal is to get three out of four laundry loads in the U.S. and Canada  done using cold water by 2030. The Procter & Gamble brand says that would reduce greenhouse gas emissions by 4.25 million metric tons, which is the equivalent of removing one million cars from the road for a year. In a decade, that would add up to a cumulative 27 million metric tons.

Switching to cold water can also allow consumers to save up to $150 a year on water and heating costs.

The brand will also try to make cold water the industry standard in the U.S. and Canada, as opposed to “today’s baseline,” which averages out to less than half of all loads washed in cold water.

Based on its own figures, Tide seems to be doing better than the average already. In 2010 Tide said just 38% of consumers' loads were washed in cold water. By 2018, a Tide scientific spokeswoman told Marketing Daily at the time, 61% of loads were done that way. At that time Tide said it was aiming to have 70% of loads done in cold water with the washer set in the quick-cycle mode by last year.

The moves come as P&G continues to signal its sustainability efforts as part of  Tide’s “Ambition 2030” declaration made on March 17.

“The climate emergency we face needs urgent action from everyone. Today, Tide announces a series of goals to decrease its carbon footprint across its full value chain, ” said Shailesh Jejurikar, CEO of fabric and home care for  Procter & Gamble.