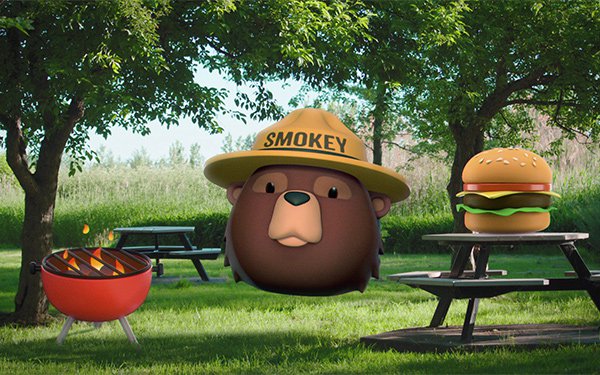 Gomez’s spot, developed by FCB, reminds listeners that dumping hot barbeque coals or ashes on the ground can start wildfires. It’s timed to coincide with Americans looking to fire up their grills ahead of summer.

The PSA will run nationwide.

The Colombian-American Gomez, best known for her role in “One Day At A Time,” was selected in order to appeal to a younger audience as well as her ability to create Spanish-language assets.

“This platform is ever-evolving,” explains Gabriel Schmitt, Co-Chief Creative Officer, FCB New York. “And at a time when people are more eager than ever to take to the outdoors, it’s important to lend the bear’s voice to prominent talent that will help it resonate. It’s our job to make sure everyone hears it.”

In addition to the video creative, the campaign has also created outdoor work featuring Smokey’s animated emoji across a variety of US regions, including the Southeast and the West.

This new creative is an extension of the USDA Forest Service, National Association of State Foresters and Ad Council’s ongoing partnership to address wildfire prevention and protecting our nation’s public lands. It is the first of several Wildfire Prevention initiatives to launch this year, and will be followed up with a Be Outdoor Safe push before Memorial Day and the release of a full suite of new creative assets. The messaging directs viewers to  www.SmokeyBear.com.