Password Sharing 'Costs' Streamers $25B Per Year In Potential Revenue, $6B for Netflix: Analyst 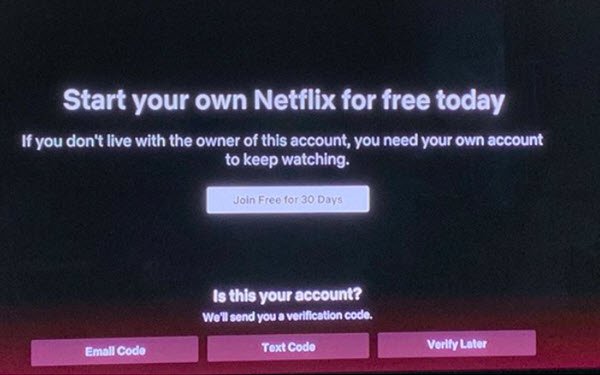 SVODs have for years ignored beyond-family password sharing, viewing it as a variation on sampling that ultimately pays off in sufficient conversions.

But facing intensifying competition and near saturation in the U.S. market, Netflix has recently begun testing methods to deter unauthorized password sharing, including some offers that include a 30-day trial (such trials were eliminated in the U.S.).

Netfix’s terms of service state that passwords should not be shared beyond the subscriber’s “household,” but household is not specifically defined.

Bazinet points out that a potential $6 billion would be a substantial gain for Netflix, which brought in about $25 billion in its last fiscal year.

“As streaming services move to center stage, thwarting this theft will be of growing importance for shareholders,” he writes, noting that investors will also be watching this issue across HBO Max, Disney+ and other SVODs.

Netflix stock soared through much of 2020, but began underperforming S&P growth last September.

Research firm Magid estimates that about a third of Netflix subscribers, which totaled more than 200 million worldwide as of January, share their passwords with at least one other subscriber.

The sharing/usage percentages were much higher among those ages 13 to 24 (64% and 78%, respectively) — and Netflix’s passwords were most likely to be shared and used by all age groups, including that youngest segment (56% share, 69% use). Disney+ had the second-highest overall sharing rate, but it was only 31%.

In August 2020, research for ExpressVPN among non-married couples (“significant others”) found 78% sharing video-streaming passwords, with Netflix (86%) again No. 1, followed by Hulu (57%) and Amazon Prime Video (52%).

Bank of America, commenting on Netflix’s crackdown tests, noted that this could potentially boost the SVOD’s net subscribers.

But as Netflix is well aware (hence its careful, low-key testing), assessing the short- and long-term financial effects of cracking down on password sharing is not as simple as just estimating the number of sharers and multiplying by the subscription fees charged.

“Any SVOD company going after password sharing is taking on its customer base, not people deliberately stealing service,” argues Colin Dixon, in nScreenMedia. “There is no guarantee people displaced by preventing password sharing will create a new subscription with the service…

“However, one thing going after password sharers will do is make a good proportion of subs angry. Putting in checks to try and block password sharing is liable to annoy customers with additional verification steps and logins.”

Netflix already has one account-sharing deterrent: It limits the number of simultaneous users, based on subscription tier, he notes.

Theoretical revenue gains from squelching password sharing are just that, and “realizing a substantial part of that theoretical revenue runs the risk of annoying and angering a large amount of the customer base,” Dixon writes.