'Irregular' Drama Of Holmes And Watson Is For The Birds 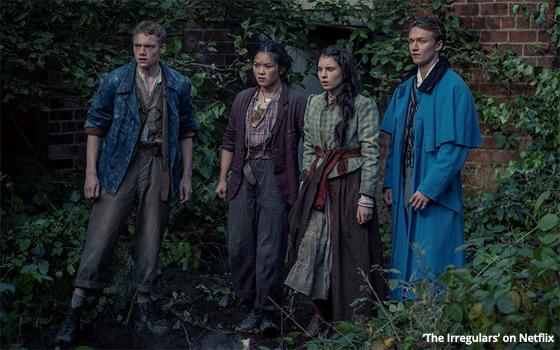 Dr. Watson is a scheming meanie and Sherlock Holmes is an incoherent drug addict in a new Netflix drama that turns the age-old Holmes-and-Watson story on its head.

In this way, this new drama called “The Irregulars” (premiering on Netflix on Friday) is right on trend. Our culture does this more or less continuously now, rethinking, reworking, reimagining -- and especially, rewriting -- everything from our literature to our history.

In this new show, the focus is only partly on Watson and Holmes and more firmly placed on a diverse quartet of London street youths who live in a squalid loft a stone’s throw from 221B Baker Street -- better known to Holmes fans as the great sleuth’s home address.

Three of these savvy, streetwise urchins are shown in the photo above, alongside an unlikely newcomer to their group, Prince Leopold (right), the hemophiliac youngest son of Queen Victoria and her husband, Prince Albert.

The identity of Prince Leo, who is AWOL from the palace, is unknown to his new friends, at least in the premiere episode of “The Irregulars” that the TV Blog previewed.

In this show, at least from the outset, the prince is an odd man out because he seems to be the only true-life character in the show. Leopold was a real person, and like others in the family of Victoria and Albert, he was indeed a hemophiliac.

With the real-life Prince Leo palling around with a band of street teens, this show is a jambalaya whose ingredients have been assembled from a variety of sources.

The title, “The Irregulars,” likely refers to the four central teen friends plus their prince, although no one bestows this nickname on this group in the first episode of the series.

They become associated with Dr. Watson when he recruits one of them to assist in an investigation into the kidnapping of four newborn babies. He decides to employ these kids because he has observed their street smarts from his townhouse window.

In this show, Watson is the head man in a self-styled detective agency in which Holmes is his mostly silent partner. In the first episode of “The Irregulars,” Holmes is barely seen.

With the sneering, bullying Dr. Watson lording it over his plucky but ultimately powerless band of street urchins like a Fagin in a Saville Row suit, “The Irregulars” is more Charles Dickens than Arthur Conan Doyle -- with a little occult magic and Alfred Hitchcock thrown in.

Hitchcock’s influence is felt in several scenes in Episode One in which a group of ravens (known as an “unkindness”) launch savage attacks on the Irregulars plus another unfortunate young woman who does not survive the onslaught.

A glimpse at her corpse revives memories of “The Birds” as much as the attacks themselves. The peculiar characteristics of her wounds make her a dead ringer for one of the victims in that 1963 Hitchcock movie -- the schoolteacher Annie, played by Suzanne Pleshette.

Without revealing too much of what happens in the show, the Irregulars do apply some dogged detective work to solving the mystery of the kidnapped babies, although the final resolution of this puzzle depends more on Harry Potter-style wizardry than deductive reasoning.

In any case, the mystery of the kidnapped newborns is only the tip of the iceberg in a story arc in which an unknown evil force is getting into position to dominate the show and its fictional location in 19th-century London.

This is teased at the conclusion of Episode One, and those who enjoy the first episode of “The Irregulars” are welcome to continue.

But the TV Blog will likely opt to end its experience with “The Irregulars” at a single episode. After that, these Irregulars and their handlers at the firm of Watson and Holmes are on their own.

“The Irregulars” starts streaming on Friday (March 26) on Netflix.