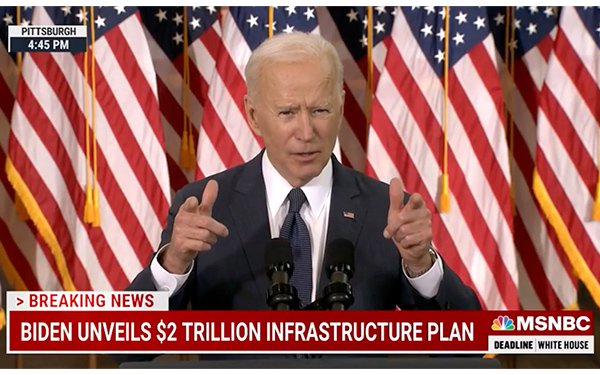 President Joe Biden has unveiled an infrastructure plan that includes $100 billion to expand broadband throughout the country.

The plan “will bring affordable, reliable, high-speed broadband to every American, including the more than 35 percent of rural Americans who lack access to broadband at minimally acceptable speed,” the White House said Wednesday.

The administration says it will prioritize support for networks operated at the local level, such as by municipal governments and nonprofits.

The White House says the plan will involve “lifting barriers that prevent municipally-owned or affiliated providers and rural electric co-ops from competing on an even playing field with private providers.”

Currently, at least 19 states have laws restricting cities and towns from building their own broadband networks.

That same year, the Federal Communications Commission voted to invalidate state laws that restrict towns from building their own fiber-optic networks. That move was reversed the following year by a federal appellate court, which said the FCC lacked authority to override states' ability to regulate how their cities and towns provide web service.

The advocacy group New America's Open Technology Institute called the plan “a good start,” adding that municipal networks “are some of the most affordable and competitive” in the country.

“Municipal networks should be legal everywhere, and the big providers should have to compete with them,” the organization stated.

Not surprisingly, the cable industry, which has often lobbied for state restrictions on municipal broadband, criticized the White House's endorsement of local networks.

The administration “risks taking a serious wrong turn in discarding decades of successful policy by suggesting that the government is better suited than private-sector technologists to build and operate the internet,” Michael Powell, president and CEO of the cable lobbying group NCTA--The Internet & Television Association, stated.

For years, industry observers have said broadband providers don't adequately disclose hidden fees and other terms of service -- including typical speeds -- to consumers.

In March, Rep. Angie Craig (D-Minnesota) introduced a bill that would require broadband providers to make key disclosures about pricing in a standardized form, comparable to the “nutrition label” that appears on packaged food.

The Obama-era FCC also endorsed that concept and, in April of 2016, unveiled a sample template for broadband disclosures. The following year, former FCC Chairman Ajit Pai dropped the idea.

Biden also aims to reduce the cost of broadband -- though the details appear somewhat vague.

“Americans pay too much for the internet -- much more than people in many other countries -- and the President is committed to working with Congress to find a solution to reduce internet prices for all Americans, increase adoption in both rural and urban areas, hold providers accountable, and save taxpayer money,” the White House stated Wednesday.