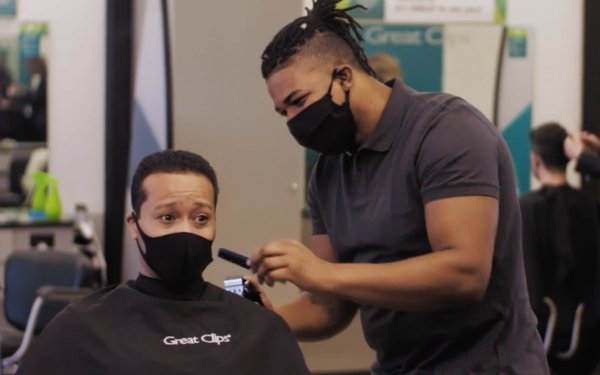 It’s been a whole year since Great Clips lost its debut moment as an official March Madness sponsor. To celebrate, it’s thanking America’s stylists with a spot running in the tournament’s Final Four coverage.

The 30-second ad isn’t just aimed at the 35,000 stylists who work for Great Clips, but the brave souls everywhere, whether they’re masking up in salons or coaching home haircuts through Zoom.

“We originally partnered with the NCAA in January 2020,” says Lisa Hake, vice president of marketing and communications, Great Clips, in an email. “Unfortunately, we weren’t able to leverage our position as the official hair salon of March Madness when the tournament was canceled last year due to the pandemic.”

Hake says the inspiration behind the new ad is acknowledging just how much haircuts have come to mean to people. Stylists help people “feel more comfortable and confident during the pandemic,” she says.

For the early weeks of the tournament, the Minneapolis-based company has been running ads encouraging viewers to use a #HairRaisingMoments tag to call out exciting gameplay. “We’ve focused on engaging with college basketball fans in a relevant and authentic way,” Hake says, “celebrating the big and small moments that make March Madness so exciting. And the on-the-court play has not disappointed.”

She says Great Clips’ target market includes avid sports fans, so its NCAA and NHL partnerships “are great platforms to connect with our audiences around their biggest passion points.”

Tracking their customers’ changing relationship with their hair has been challenging, with many salons closed or operating on a limited basis. “However, as mandates lifted and customers became comfortable with the protocols established across all of our salons, we saw considerable upticks in visits at the end of last summer and fall. We fully expect to see considerable growth in the months ahead. Customers want that fresh-haircut feeling again.”

The spot is set to air on ESPN2 during the College Slam Dunk and Three-Point Championships. Hunt Adkins is the ad agency.