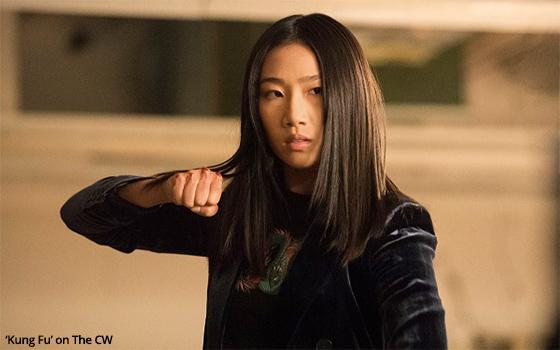 For me, a single line of dialogue helped ruin the experience of watching the premiere episode of the new CW series called “Kung Fu.”

The show is about a Chinese-American family in San Francisco named Shen, and in particular, their daughter Nicky (played by Olivia Liang, pictured above).

In the series’ premiere, she returns home after three years away, during which she has been traveling in China on a journey to find herself.

A description of the show from The CW publicity department says this 20-something young woman was having a “quarter-life crisis” -- a phrase that was new to me.

Mid-life crises I can understand. But a quarter-life crisis? Maybe instead of running away to China, she should have bought herself a Corvette.

In any case, as part of the process of dealing with her quarter-life crisis, she ended up at a monastery occupied only by women where she was intensively schooled in the martial art known as kung fu.

This experience forms the foundation for this show, whose credits state that it was inspired by the original “Kung Fu” series of the 1970s. And yet, it bears no resemblance at all to that show.

Meanwhile, back in America, Nicky discovers that her family’s business, and their very lives, are under threat from a local organized crime kingpin, also Chinese-American, who supposedly controls all life in San Francisco’s Chinatown, where the Shens own a restaurant.

With little faith in the SFPD, the Shens’ grown children -- Nicky, her sister Althea and brother Ryan -- band together to investigate the gang and its kingpin in an effort to bring him to justice.

At one point in their discussion about this plan, they decide that they will try to interview the other Chinese-American business owners in the neighborhood to learn if they too are being intimidated by this Chinese-American gang.

The three siblings agree that they will have better success talking to the business owners than the police because these shopkeepers and restaurant operators are also Chinese and therefore more likely to trust and open up to them.

So at this point, Althea observes that this situation represents “one of the few times not being white has its advantages!”

This is the very definition of a “throwaway” line because it has no connection to anything that has happened so far in the episode, or will happen as the episode proceeds.

At no time in this show does this family seem to be bedeviled, mistreated, discriminated against or threatened by any white people.

On the contrary, the one white character in the show is an assistant DA (and former love interest of Nicky’s) who is helping them in their efforts to bring down the kingpin and in the process, risking his job and career.

By all appearances, the Shen family is doing great. They are a nice family whose parents worked hard and fulfilled their American dream. Althea is a successful software entrepreneur, Ryan is a pre-med student and Nicky is a kung fu master who got into Harvard.

In the premiere episode of “Kung Fu,” the only people standing in the way of their continued pursuit of happiness are other Chinese-Americans -- this kingpin named Kang and his Chinese-American henchmen.

Althea’s sudden reveal that she resents white people makes no sense. And since it has nothing to do with the show and its storyline, it is jarring and offensive.

It is a throwaway line that should have been thrown away, along with this show.