Once A Red-Hot Topic, Meghan And Harry Fade From View 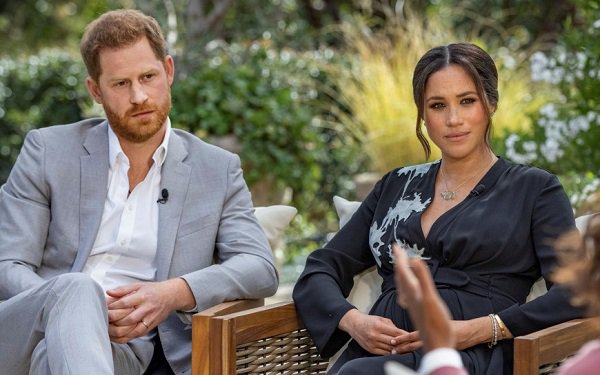 Remember Prince Harry and Meghan Markle and all of the attention they drew when Oprah Winfrey interviewed them on TV last month?

You can be forgiven if the whole thing has slipped your mind. I suddenly remembered it this week and was surprised that I had almost totally forgotten about it, and them.

I began to wonder how something that loomed so large a few short weeks ago now barely registers. I came to the realization that all of the attention Meghan and Harry attracted -- i.e., publicity -- seems to have amounted to very little, if anything.

Their high-rated prime-time interview on March 7 was like a sizable rock tossed into a pond. It created some pretty big ripples, but like a pond in the aftermath of such a rock-tossing, the ripples soon subsided and the pond water was still, as if the rock never happened.

Today, most people, if asked, would not have any idea what Harry and Meghan have been up to since the interview aired. If asked whether they even think about Harry and Meghan on a typical day, most (if not all) people would answer no.

Contrast that with the avalanche of news stories, commentaries and talk-show hours that resulted in the days immediately after this two-hour interview in which the once-royal couple leveled accusations one after the other at Britain’s royal family.

Among other things, they accused the royals of racism, callous indifference to Meghan’s emotional suffering, and mental cruelty (Meghan’s assertion that sister-in-law Kate Middleton made her cry).

For a number of days, the media burst with stories. The royal family was in shock, the monarchy threatened, and the British public outraged (either in favor of Harry and Meghan or against them).

At no point was it possible to detect a groundswell of support in which the commentary centered on the positive messages Harry and Meghan were hoping to get out there. What were they?

I forget, but I think at least some of the messaging had to do with depression and Meghan’s activism or interest in this issue.

They also evidently wished the viewing public to think of them as “nice,” “normal” or facing challenges and struggles just like everybody else, despite their wealth and the luxurious surroundings in which they live. News flash: They were not relatable in this way.

But that’s the thing: If Harry and Meghan’s aim was to polish and remake their public image, then this prime-time interview gambit did not work.

Like so many celebrities before them, they somehow formed the idea that if they honed their messages and presentation in just such a way, then the news media and the rest of the world would go along with them.

It should go without saying, but this is an unrealistic point of view that only someone living in La La Land could ever adopt. The lesson is: The media does what it wants.

In the aftermath of the interview, almost nobody commented or dwelled on the positive issues Harry and Meghan probably wanted to get across. Instead, the coverage was all about how they had tossed their own large rock into the placid pond of the British monarchy.

The interview ignited debates chiefly around the racism accusations. Some of the conversations on TV from the U.S. to the U.K. became so heated that these discussions became bigger news stories than the interview itself.

You know who got more publicity from this Harry and Meghan interview than Harry and Meghan? At least two come to mind: Sharon Osbourne and Piers Morgan, who were both making headlines for weeks after the interview, long after the Duke and Duchess.

Except for a news story that made the rounds a few weeks ago that Prince Harry had gotten a job, he and his wife have pretty much faded from view, leaving the rest of us to wonder: What was that whole interview thing about again?

celebrity, tv
2 comments about "Once A Red-Hot Topic, Meghan And Harry Fade From View".
Check to receive email when comments are posted.
Read more comments >
Next story loading