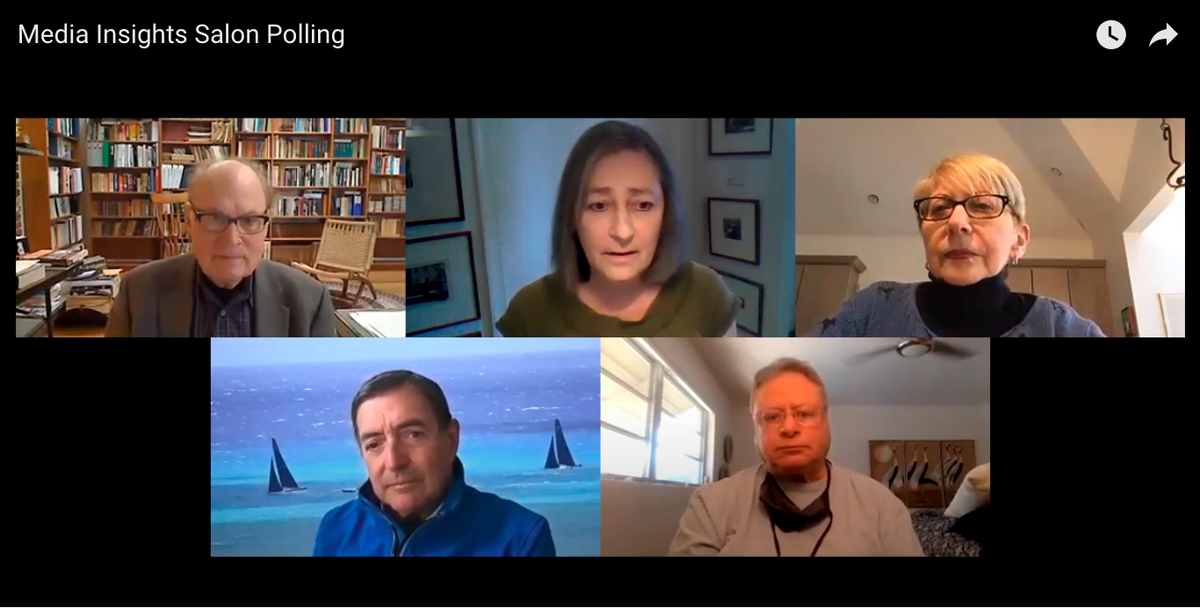 Public perception about the inaccuracy of political polling during the 2016 and 2020 presidential elections has contributed to a crisis of confidence for the survey-based research industry, especially media researchers, a roundtable of industry experts said Monday.

The roundtable, organized by media research vets Tim Brooks and Charlene Weisler as part of an ongoing series of “media insights salons,” can be viewed in its entirety below, but the consensus was that negative attention surrounding the accuracy of political polling, has exacerbated concerns about media research in general.

Coming at a time when many in marketing and media already have begun moving away from survey-based research in favor of data science, as well as concerns that the efficacy of surveys has also deteriorated due to changes in the way surveys are conducted, especially the volume and ubiquity of them, the experts said.

“If we’ve learned anything over the past couple of years, it is that politics ruins everything,” quipped Betsy Frank, former research chief at Time Inc., Viacom, Zenith and other organizations, acknowledging that public perceptions have been tarnished. She blamed the news media, in part, for their coverage of political polling pre- and post the elections, but also acknowledged that the environment surrounding survey-based research has fundamentally changed, and that other methods -- including observational methods, or biometric techniques -- may be part of a longer term solution for measuring media.

“What’s happened now is the cynicism that we’ve seen in politics now has spilled over,” concurred Jack Wakshlag, former head of research at Turner, WB, CBS and currently an advisor to Simulmedia, adding, “There’s a decline in trust.”

Wakshlag noted there have always been issues with how survey-based research has been conducted, especially ensuring that they used proper sample sizes and representative ones, but he implied that many organizations have been let standards slide and that has contributed to a loss of confidence about research science overall.

He suggested some of the problems with sample representation -- including political polls -- could be offset by utilizing sample weighting techniques to compensate for the under-representation of key segments. That is one of the factors many researchers attributed to the inaccuracy of political polls in 2016 and 2020, because so-called “shy Trump supporters” may have been reluctant to participate in polls, or if they did, to give accurate answers about their voting plans.

Wakshlag noted that weighting has been an integral part of media research for decades, including panel-based research such as Nielsen’s, which has used weights to adjust for the under-representation of certain demographics, especially hard to reach ones.

Brooks, former research chief at Lifetime, USA Networks, and legendary ad agency N.W. Ayer, added that part of the problem with survey research is that methods have changed from the simple days of diary-based panel surveys and random-digital-dialing telephone surveys to online polls, which virtually anyone and everyone can conduct.

That latter point was something Paul Donato, Chief Research Officer of the Advertising Research Foundation, and Nielsen before that, said may be negatively impacting the quality of survey research, noting that many consumers -- especially those who were stuck at home during the COVID-19 pandemic -- may have become professional survey-takers in order to make a little money on the side from researchers and pollsters.

Donato said he doesn’t have any hard numbers to say exactly how much the survey universe has grown, but he noted that “response rates” for many forms of formal industry research soared during the pandemic, which is an indication that consumer behavior changed -- at least for a period of time -- during the pandemic.

Long-term, Donato suggested the best possible method of the media and marketing research industry might be a combination of techniques, including well-conceived and maintained panels that can control for the representation of various consumers, as well as data analytic methods that could be used to benchmark, and adjust each other.

He described this as a “proper balance between a well-curated panel and machine-curated data, and said that utilizing the two processes simultaneously would lead to the best “scientific combination” of research and data science.

cmmr, covid-19
1 comment about "Media Researchers: Politics Ruins Everything, Including Media Research".
Check to receive email when comments are posted.
Next story loading