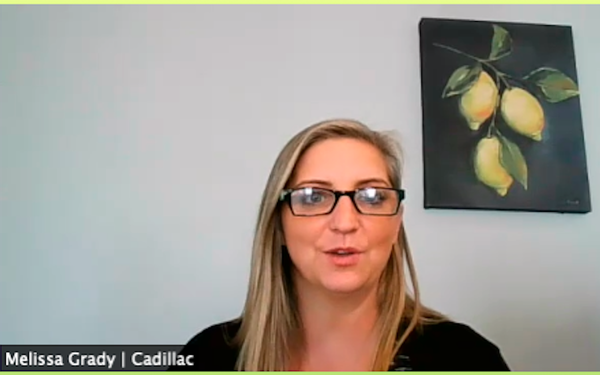 Cadillac is a brand known more for luxury than for speed, per se, but on Tuesday, its CMO demonstrated just how fast it could accelerate when confronted with the marketing challenge of a lifetime.

“What strikes me most about this time line is not what happened. It’s how quickly it happened,” Melissa Grady said during a keynote at MediaPost’s virtual Marketing Automotive Conference.

Grady, who had barely just gotten her CMO stripes for the brand when the COVID-19 pandemic officially shut down American beginning March 13, said she immediately had to hit the brakes on Cadillac’s first-quarter marketing, which was humming on all cylinders following the Oscars launch of its new Escalade line.

Grady, who provided a graphic time line illustrated below, said she pulled the upbeat marketing and replaced it with a more somber, but appropriate message: “We have your back.” Most remarkable of all, that campaign went from a concept brief on March 13 to being on-air on March 19.

It was trial by fire for the rookie CMO, who conceded she “learned a lot."  Learning to be agile in repositioning a brand for a pandemic was “exciting times,” she added, implying it was also a case study in how to adapt, survive and grow when confronted with unprecedented adversity.

Like other automotive marketing leaders who spoke during the opening day of the conference Tuesday, Grady noted that the initial and sustaining response was to focus not on selling cars per se, but on caring for its communities, especially its dealer network and the American auto buyers it serves.

Just a few weeks after launching its “We Have Your Back” campaign, Grady said Cadillac parent GM literally had its community’s faces, too, shipping the first wave of GM-made masks across America on April 8. Less than a week later, on April 14,  GM began shipping the first of its manufactured ventilators to hospitals -- nationwide as well.

She recalled the unprecedented spirit of banding together to solve a national health crisis, especially the sense of fear that pervaded every stakeholder -- from consumers, to dealers to its own marketing organization -- noting, “There was no one who wasn’t having a difficult time.”

But that’s when the Cadillac brand shifted into high gear, she said, recalling a strategy to focus on three core areas:

Much of those efforts focused around leveraging the brand’s new “Cadillac Live” digital interface, enabling current or prospective customers to literally have their own, personalized showroom experience right from the convenience of the digital device in the safety of their home.

“It was like your own private auto show,” she recalled, adding that users could interact with a representative using props like golf clubs or see what the interior of cars looked like with “taller people” sitting in the seats.

She said the interface was designed for an interaction period generally between 30 seconds and 30 minutes long, but that in many cases, “sessions were over an hour, because people couldn’t go into the dealerships.”

The “shop, click, drive” nature of the digital visualization enabled customers to literally buy a new Cadillac and have it delivered to their door.

Like others in automotive and general marketing, Grady said Cadillac’s marketing and dealer organizations accelerated a decade’s worth of digital transformation in one year.