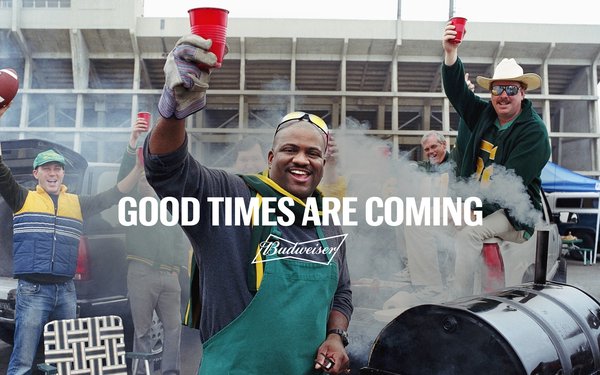 Earlier this year Budweiser made headlines when it announced that it would not be airing a Super Bowl ad for the first time in 37 years. Instead it decided to redirect that media investment to raise awareness about the COVID-19 vaccine.

Now, Budweiser, via the Anheuser-Busch Foundation in partnership with the Ad Council, is recognizing National Beer Day on April 7 by releasing a COVID-19-related PSA to remind viewers that vaccines are a key step in getting back to the “good times.”

The PSA, developed with David Miami, is set to the song “I’ll Be Seeing You” performed by Jimmy Durante and features photographs of those enjoying pre-pandemic life. The film ends by directing viewers to GetVaccineAnswers.org to find additional resources.

“The country is at a critical moment in its recovery,” stated Monica Rustgi, vice president of marketing at Budweiser. “If the film inspires anyone who is on the fence to go ahead and get a vaccine, then we’ve done our job.”

The “Good Times are Coming” spot will be released on social and digital channels along with national television through the month of April.

Budweiser will continue to support COVID-19 vaccine awareness and education efforts with additional campaigns in the coming months.

The Anheuser-Busch Foundation has had a longstanding partnership with the Ad Council including efforts on so-called “responsible drinking” and buzzed driving prevention. In spring 2020, the Anheuser-Busch Foundation also participated in the Ad Council #AloneTogether campaign promoting responsible consumption behaviors during the COVID-19 pandemic.

Separately, The Ad Council and COVID Collaborative have released two more audience-specific initiatives. Country music stars Eric Church, Ashley McBride and Darius Rucker are joining ACM Lifting Lives, the philanthropic arm of the Academy of Country Music (ACM), to entice music fans to get a vaccination when it’s available to them. The PSA was shot at Nashville’s iconic Ryman Auditorium and Grand Ole Opry House and will debut during the 56th Annual ACM award show on Sunday, April 18.

In another effort, the Council is working with the ChristiansAndTheVaccine.com coalition — including the National Association of Evangelicals, Values Partnerships, Public Square Strategies and Redeeming Babel.

This content in this campaign is designed to reach the religious community with information from so-called “trusted” members, including an exclusive interview with Dr. Francis Collins, director, National Institutes of Health. Moving forward, this new group will release additional content and host events and work with media outlets to directly address the concerns of these so-called “vaccine-hesitant evangelicals.”

“We know the important role faith plays in the lives of millions of people throughout the country and, with this critical effort, we are partnering with leading evangelical voices to address the concerns and hesitancy in their communities to ultimately increase confidence in the COVID-19 vaccines,” says Lisa Sherman, CEO, Ad Council.