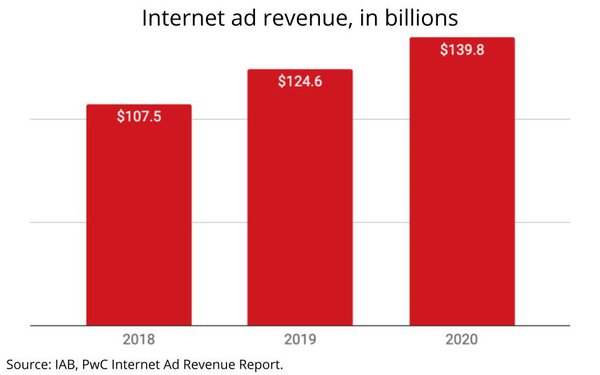 Despite -- or maybe because of -- the COVID-19 pandemic, internet ad spending soared 12.2% during 2020 to $139.8 billion, according to a just-released annual report from the Interactive Advertising Bureau (IAB) and PwC.

While the first half of 2020 -- especially the second quarter, which declined 5.2% vs. the same quarter a year earlier -- did languish from the U.S. shutdown, and the cancellation of many ad budgets, the second half more than compensated for it.

“The second half of 2020 made up for the rather abrupt drop in advertising revenue experienced toward the end of the second quarter,” IAB Senior Vice President, Research and Analytics Susan Hogan said in a statement, adding, "We not only had a rebound, we also had double-digit growth.