Yes, You Are That Bitter! Hop Valley Beer Can Prove It To You 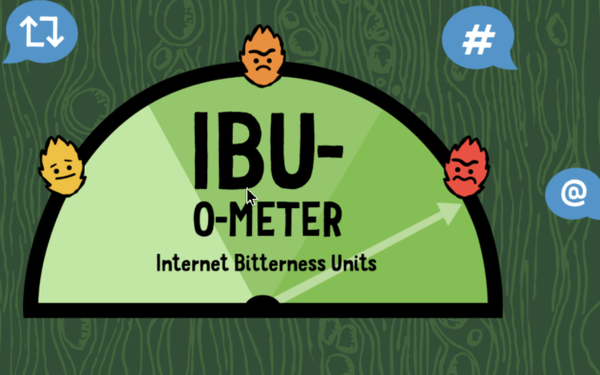 Casual beer drinkers may not know it, but the professional quaffer knows full well that beer is graded on the International Bitterness Units scale, or IBU. The scale calculates bitterness by the amount of iso-alpha acids the beer contains.

It concocted the  IBU-O-Meter to measure Internet Bitterness Units. Log in to Hop Valley’s IBU-O-meter.com, allow access to your Twitter handle, wait a moment -- and up pops your personal IBU ranking, which susses out just how bitter you actually are, based on your last 100 tweets. Participants can also sign up for free beer.

The company launched the idea in time for National Beer Day, which somebody has decided is April 7. The IBU-O-Meter was also timed to the national rollout of  Hop Valley’s IPA variety pack, the CryoHops Stash Pack.  Until now, Hop Valley was only  available in Washington and nine nearby states.

A spokeswoman for the brand says it’s not just a random measurement. “The IBU-O-Meter is legit!” she says. “It uses a machine learning algorithm to analyze the text found in your Tweets and detect the overall sentiment (positive, negative or neutral) based on a pretrained set of historical data.”

For example, a reporter for Marketing Daily was found to have written 59 positive tweets recently. The other 41 reflected the bitter hostility he feels based on a veritable lifetime of dreams that were crushed like, well, a cheap beer can.

That 60/40 ratio earned him another indignity: The analysis of such a score “means” he’s “Floral and Earthy.” The description continues, “So your tweets are, how do we say it, like that freshly mowed lawn taste. It’s not bad but it COULD be better."

There are two other bitter types:

-- “Bright & Bubbly,” which means the tweeter is “fresh, juicy and brilliant” – and, given the general tone of Twitter, has absolutely no followers.

--”Dank & Bitter.” To those people, the IBU-O-meter is sympathetic: “Listen, we get it. Seems like you’ve had a haze of cloudy bitterness surrounding you lately, just like the most bitter brews.”

Beer marketers who depend on more sophisticated techniques to grab new customers might be dank and bitter to see the earned media Hop Valley has gotten from websites like Yahoo, The Takeout, FoodSider, MarketScreener and Delish. A paid social ad campaign is also part of the marketing mix.