Naked Juice: 'Strip Away' Daily Hassles With A Smoothie 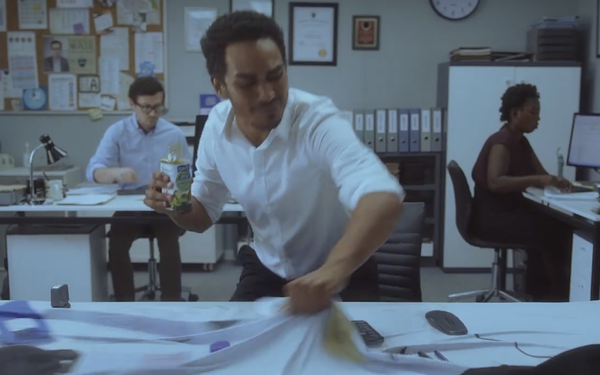 Those messages are conveyed in a 15-second spot titled “Office” that debuted this week from the C-K agency.

Crafted by director Michel Gondry and his brother Olivier, who is a visual effects artist, “Office” depicts a stressed office worker who manually “strips away” his desk and an office wall before being transported to a bucolic countryside.

In the process, the worker also rids himself of “added sugars and preservatives” in favor of “the real fruit and vegetable juices of Naked.”

“We connected with our consumers during the development of this campaign and their response has been overwhelmingly positive,” Anup Shah, vice president and CMO Juice Brands, PepsiCo Beverages North America, tells Marketing Daily. “The campaign message especially rings true for consumers amidst the pandemic. They’ve stepped back and reflected on what really matters and prioritized the positive in their lives, stripping away the unwanted and going back to what makes them happy.”

Later this month, a 15-second spot called “Sidewalk” will feature the everyday moment of “walking along a bustling, overwhelming city street” that segues to another serene environment, according to Shah.

It will also appear on such cable networks as BBC America, BET, Bravo, HGTV and Nick at Nite, and streaming properties including Discovery, NBCUniversal and Hulu/Disney+.

The“Strip Down To Naked” campaign differs from the brand’s 2019 advertising, which highlighted “small steps”—for example, climbing stairs instead of an elevator or escalator—on the path to personal wellness.

Data from Nielsen shows that dollar sales of smoothies rose 6.4% in the 13-weeks ended March 27 versus the same period a year ago. The biggest gains came in assorted flavors (+145%) followed by fruit blends (+24%) and strawberry banana (+20%).