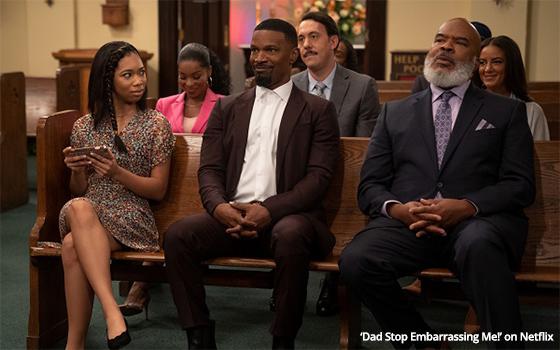 Pity the poor comma -- it was not even deemed necessary for inclusion in the title of “Dad Stop Embarrassing Me!,” a new Jamie Foxx sitcom starting on Netflix this week.

For those who are not grammatically inclined, a comma would traditionally appear after “Dad” in a title (or sentence) of this type that starts with someone who is being addressed, as in: “Dad, Stop Embarrassing Me!”

Perhaps the comma is finally going the way of the dodo, although this evolution has been underway for years.

In my own career, an editor I worked for as far back as 1982 was keen on limiting and reducing the role of the comma in the copy we worked on. But even she would not have deleted the comma in “Dad Stop Embarrassing Me!”

But I digress. Whomever created the title for this TV show, and decided against punctuating “Dad” with a comma, apparently felt otherwise about the need for another piece of punctuation -- the exclamation point at the title’s end.

Where this show is concerned, the exclamation point in its title is just about the only excitement this show is likely to generate.

It raises a question -- namely, why is Jamie Foxx, a movie star and Oscar winner, appearing as a sitcom dad in a comedy series that is so mediocre it would barely have succeeded on the old WB or UPN?

One reason is that his daughter, Corinne Foxx, is listed as executive producer of “Dad Stop Embarrassing Me,” and he is doing her a very loving favor by agreeing to star in her show.

Indeed, the show's premise is supposedly “inspired by” Jamie Foxx's real-life relationship with Corinne, 27, who is represented in the show as a teen played by Kyla-Drew (above photo left, with Foxx, center).

In the series premiere, we learn that Jamie's character is a single dad who heads up an Atlanta-based cosmetics company. However, in the first episode of “Dad [etc.],” we never see the office or headquarters of this company, nor do we ever see him doing a lick of work there either.

Instead, he gets into a lot of awkward dad situations such as wearing skinny jeans that are too skinny for him.

The premise of the show is that his daughter, Sasha, has come to Atlanta to live with him (for reasons that are not explained in Episode One), and he now must make changes in his single lifestyle.

Among other things, this includes curbing the pot smoking of his sister and father, who is played by David Alan Grier (above photo right). He is an interesting casting choice to play Jamie Foxx's dad, since Grier is only 11 years older than Foxx.

This casting mistake is far from the only thing wrong with this sitcom. In the first episode alone, we learn that the Jamie Foxx character is sleeping with a young, sexy woman who works for him, and nobody bats an eyelash over this workplace no-no.

So much is wrong with this scenario that it hardly needs to be gone into. Suffice it to say that “Dad Stop Embarrassing Me!” is an embarrassment for all concerned.