Executive Shift At TBWA NY As Reyes Is Named CEO 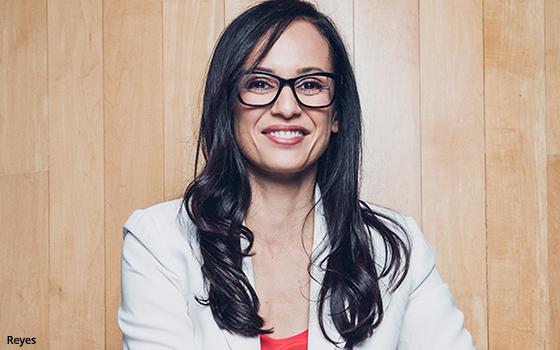 She succeeds Rob Schwartz, who has been CEO since 2015. Schwartz, a 20+ year veteran of TBWA\Chiat\Day, is shifting to the newly created role of Chair of the TBWA New York group, which includes TBWA\Chiat\Day New York, Lucky Generals New York and 180NY. In his new role he is tasked with  marketing and driving growth at the three TBWA-affiliated agencies.

Reyes joined the agency in April 2016 as managing director, becoming president in July 2018. She will report to Troy Ruhanen, CEO, TBWA\Worldwide. Prior to joining the agency she held a top marketing role at Verizon.

Working in partnership with Schwartz and the agency’s executive leadership team, Reyes has helped lead the agency through a resurgent period, growing more than 180% in revenue in five years. She has been instrumental in generating new business with clients such as Hilton, TD Bank, Facebook and PepsiCo, and in elevating the agency’s creative product.

The New York office was TBWA’s top-performing agency at the 2019 Cannes Lions Festival of Creativity and the #5 individual office in the world at the last Lions festival.

Amid the pandemic-related pressures of 2020, the New York office grew, winning new assignments from PepsiCo (bubly, RISE and lays), Facebook Oculus and Abbott, and adding more than 60 employees to handle the new business.

In addition to her business-focused duties, Reyes has led TBWA\Chiat\Day New York’s Diversity, Equity and Inclusion efforts. In 2018 she created a mentorship and leadership program called Circle of Women, aimed at building a pipeline of women leaders within the agency by offering executive coaching and mentorship to a high-potential group of women in senior roles.

Ruhanen said that Reyes “is an exceptional leader, business partner to our clients and developer of talent. She understands the power of creative ideas in driving growth and the importance of empathy in motivating people. Her impact on the New York agency and on our collective has been undeniable.”