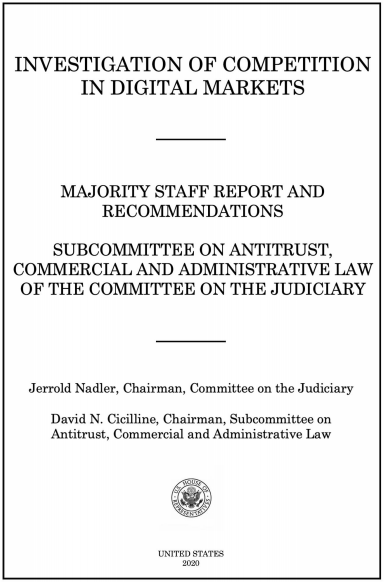 The House Judiciary committee has approved a staff report alleging that Apple, Amazon, Facebook, and Google abused their “tremendous power” by “charging exorbitant fees, imposing oppressive contract terms, and extracting valuable data from the people and businesses that rely on them.”

The report's approval, which passed by a vote of 24-17, is seen as likely to spur new antitrust legislation.

The 450-page report, released last October by the House antitrust subcommittee, alleges that the four tech companies maintained their market dominance by copying or acquiring competitive rivals, and engaged in “self-preferencing, predatory pricing, or exclusionary conduct.”

“Companies that once were scrappy, underdog startups that challenged the status quo have become the kinds of monopolies we last saw in the era of oil barons and railroad tycoons,” the report stated.

Among other accusations, the report said Facebook “used its data advantage to create superior market intelligence to identify nascent competitive threats and then acquire, copy, or kill these firms.”

Shortly after the report was released, the U.S. government and various states brought antitrust lawsuits against Google and Facebook.

The report's recommendations included forced break-ups, as well as new legislation that would make it more difficult for large companies to acquire other businesses.