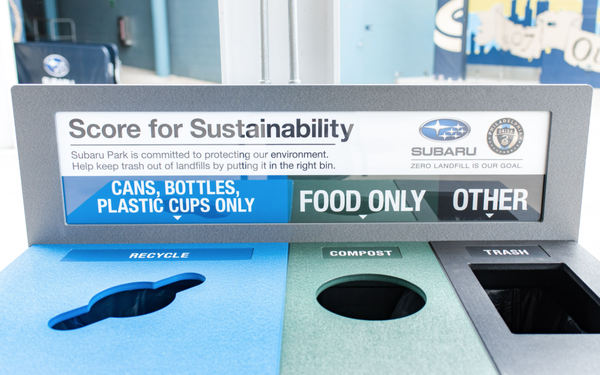 Subaru and its Major League Soccer partner hope to start a positive trend in sports stadiums, which generate massive amounts of trash that go into environmentally harmful landfills.

The automaker is bringing its established zero landfill techniques to Subaru Park, home of the Philadelphia Union, making it the first zero landfill stadium in MLS.

The goal is for Subaru Park to reduce, reuse and recycle all of the waste from the stadium, resulting in no trash or waste going into a landfill.

According to the automaker, the initiative ladders up to the core commitment of Subaru and Philadelphia Union to use their partnership to beautify and enhance the greater Philadelphia community through pillars of the Subaru Love Promise.

The effort includes more than 100 MAX-R Containers, three-stream waste containers which will help patrons properly dispose of their waste. To ensure that the containers are being used properly, Subaru will provide ambassadors to help educate fans with waste disposal and share Subaru Zero Landfill project best practices.

Meanwhile, General Motors’ Chevrolet brand is aiming to get more consumers thinking about electric vehicles via an initiative today on the by-invitation-only social media platform, Clubhouse.

Chevrolet, the first automotive brand on the channel, is hosting a discussion, “Flipping the Switch on EVs” centering around why everyone should consider switching to an electric lifestyle.

The panel follows the recent launch of the new 2022 Bolt EUV and redesigned 2022 Bolt EV. It will be moderated by TikTok creator Nick Cho (aka @yourkoreandad), and feature EV and tech experts Kelly Helfrich, Jenna Ezarik and iJustine. The conversation will occur at 8 p.m. EST. and is open to anyone on Clubhouse.

The video shows BTS members taking part in eco-friendly activities that can  be incorporated into everyday routines in an effort to encourage others to do the same.

This is Hyundai Motor’s second Earth Day video starring BTS, the first of which was released last year, generating over 100 million views on YouTube.

Hyundai Motor has collaborated with BTS on its global hydrogen campaign since last year to spread awareness on the importance of sustainable practices and the future of hydrogen as a source of clean energy under the slogan "Because of You."