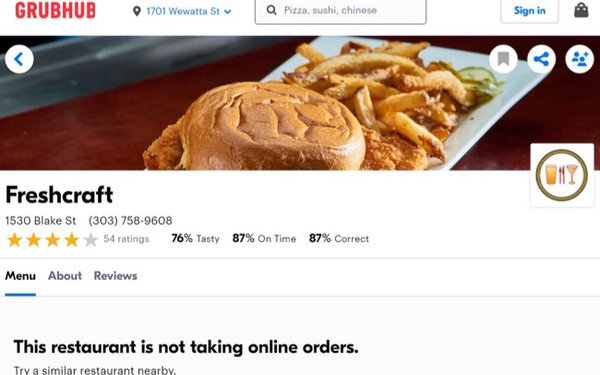 Delivery service Grubhub Inc. has agreed to settle a lawsuit in which it was accused of falsely advertising that non-partner restaurants were closed or not accepting orders so that Grubhub could steer people to its partner restaurants.

In the suit filed last May, CO Craft LLC—which operates Denver-based, family-owned Freshcraft Beer Bar & Kitchen—claimed that Grubhub made the false claims within its app and on its website.

The class-action lawsuit was filed on behalf of all U.S. restaurants.

According to the suit, Grubhub knowingly employed “a nationwide false advertising campaign to steer patrons to its partner restaurants by falsely declaring that its competitors are closed or not accepting online orders when they are in fact open for business.”

While the plaintiffs believed that Grubhub’s alleged behavior pre-dated COVID-19, “the impact of its nationwide practice is especially damaging to restaurants that are struggling to keep afloat economically during the pandemic."

According to the suit, searches on Google using the term “Freshcraft delivery” produced a Grubhub listing as the #1 search return—just ahead of Freshcraft’s own listing.

Clicking the listing brought people to a Grubhub landing page containing this language: “This restaurant is not taking online orders. Try a similar restaurant nearby.”

Potential Freshcraft customers were “directed towards one of several Grubhub partners so that Grubhub can steer consumers to restaurants who produce revenue for Grubhub by using their delivery service,” according to the suit.

Clicking on the listing in a mobile browser automatically opened the Grubhub app—if the searcher had downloaded it—and produced a notice that Freshcraft was closed.

“This online advertisement falsely claims that Freshcraft is closed when it is not,” the suit stated. “In reality, Freshcraft is not only open, but also delivering its food to its customers using a different delivery platform.”

According to the suit, “only restaurants that do not partner with [Grubhub] are falsely advertised as closed or not accepting online delivery orders when they are in fact open for business.”

Moreover, Freshcraft alleged that “Grubhub's intentional and willful false advertising campaign is not limited to mom and pop restaurants; it has also been used on popular, nationwide restaurant chains.”

The Freshcraft lawsuit also contained a link to a video the plaintiffs said Grubhub posted March 27, 2020 on YouTube.

The voiceover in the video stated, “Restaurants are our family, the cornerstone of our communities, and our family needs help. Grubhub. Together we can help save the restaurants we love.”

That video is now listed as Private and “unavailable” on YouTube.

Acquired last year by European food-ordering firm Just Eat Takeaway, Grubhub did not admit to any wrongdoing in the settlement reached last Friday but agreed to several terms.

Grubhub cannot include the following language under an element on Landing Pages for which it does not offer any delivery: “Order deliveryor pickup from [restaurant] in [city]!View [restaurant’s][month] [year] deals and menus.”

In addition, Grubhub cannot use language under an element “that states that it is offering services in connection with a Covered Restaurant when it is not.”

The settlement defines a covered restaurant as any restaurant, convenience store, market, grocery store or other foodservice business that did not have any type of agreement with Grubhub from May 11, 2016 until the settlement is approved.

The United States District Court for the District of Colorado will determine whether the settlement is approved.

Under terms of the deal, all parties to the lawsuit agreed that if they are contacted by the press “they will respond only that this Action has been amicably resolved to the Parties’ mutual satisfaction.”