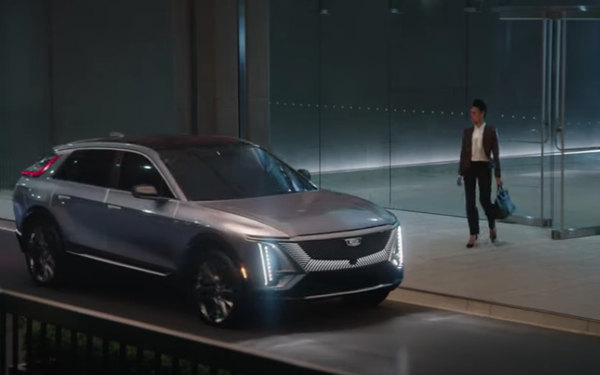 Love it or hate it, it was an Academy Awards show like no other.

In some cases, the TV spots seemed more lively than the show, and that’s not necessarily a bad thing from a marketing perspective. Think blow-out Super Bowl game when viewers perk up to watch the TV spots.

Cadillac has been part of the Academy Awards for eight years. The General Motors luxury division typically uses the ceremony’s broadcast -- which is second only to the Super Bowl in global viewership -- to launch new products and brand campaigns.

This year, it was the not-yet-available Cadillac Lyriq that got spotlighted. It’s interesting timing, since the vehicle won’t be in showrooms for almost another year,  but the automaker will begin taking pre-orders in September.

Cadillac CMO Melissa Grady noted significant chatter on social media after the airing of “Lighting the Way,” which made its debut in both 30-second and 60-second versions on the broadcast. Cadillac brand ambassador Regina King does the voiceover in the aspirational creative from Leo Burnett, which shows a young woman morphing into a  business leader.

That social media chatter was good, since the show itself didn’t draw the eyeballs it normally does. Only 9.85 million viewers tuned into Sunday’s Oscars ceremony, a nearly 59% percent drop from the 23.6 million viewers that turned on their TVs for the program last year, according to early national numbers released by Nielsen.

Despite that, advertisers paid $2 million per 30-second spot, per Kantar. Besides Cadillac, other top sponsor-level advertisers in this year’s show included Google, Rolex and Verizon.

Cadillac had a total of four spots during the show and in the pre-show when it aired the Super Bowl's "Edgar Scissorhands" spot.

The Lyriq spot is part of an effort launching today across social, digital and traditional channels for the luxury brand’s first vehicle with zero emissions.

Positioned as the pioneering vehicle that will light the way for Cadillac’s all-electric future, Lyriq will be the cornerstone for Cadillac’s electric vehicle portfolio in the coming decade, and it sets the standard for a new era of electrified luxury, Grady tells DriveTime.

At least this year the brand knew going in to expect the unexpected from the broadcast.

“When we started planning the Oscars last year, we really thought we'd be back to in person by April, so it's been a really interesting year of trying to plan and then just looking at what worked and what didn't work,” Grady says. “It was a very different activation, but we were really pleased with the way that it came out.”

Last year, an effort themed “Make Your Way” included three spots. Regina King helped introduce the campaign and 2021 Escalade in one spot, while two additional spots, “No Barriers” and “Finish Line,” highlighted Cadillac’s new vehicle line-up, while celebrating the grit of those who make their own way to success.

While this year was much more subdued, it still worked for the brand, Grady says.

“It was a little different and interesting, so we just played with the cinema of it and had fun. And now we're going to keep telling the message today,” she says.