General Motors, NBA Among 100 Most Influential Companies Ranked By 'Time' 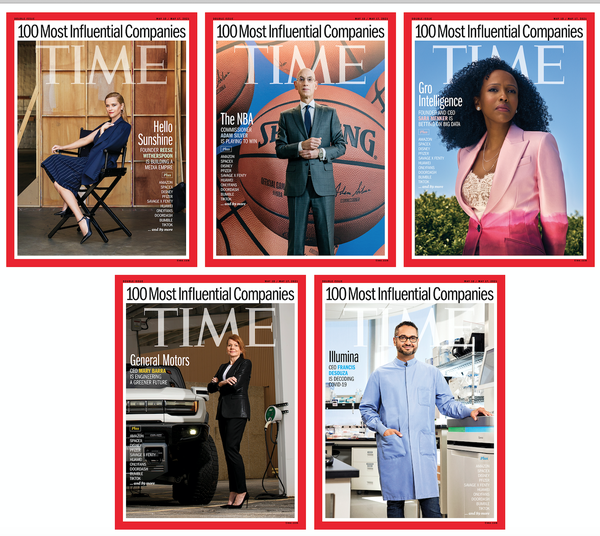 Varying from startups to mega-corporations, Time has named the 100 most influential companies, an expansion of the Time100 franchise.

Highlighted are businesses “making an extraordinary impact around the world,” per the publishing company.

To assemble it, Time solicited nominations across various sectors including health care, entertainment, transportation and technology from its global network of editors and correspondents as well as from industry experts. Then each was evaluated on factors such as relevance, impact, innovation, leadership, ambition and success.

The most recently founded company on the list is Clubhouse, created in spring 2020, which features an invitation-only social media app. Pfizer, founded in 1849, and General Motors, founded in 1908, are among the oldest companies.

The issue features five worldwide covers, each spotlighting a CEO from a company on the list, each given an in-depth profile inside the publication. GM CEO Mary Barra spoke with Time on the automaker’s plan to invest $27 billion in electric vehicles and introduce 30 new models by 2025.

Other CEOs featured on covers are Reese Witherspoon of Hello Sunshine, Adam Silver of the National Basketball Association, Francis deSouza of Illumina, and Sara Menker of Gro Intelligence.

The entire list of companies can be viewed online.

Eighteen companies on the list are headquartered in Europe, including Volkswagen, Adidas, Lego, Farfetch, Oatly and Unilever.

The entertainment industry is also represented by companies including Netflix, Spotify, TikTok, HYBE and Disney.

The release of the list coincides with the company’s launch of Time Business, which is “devoted to covering the global impact of business and the ways it intersects with our public and personal lives.” The group’s first major project was compiling the list of most influential companies.