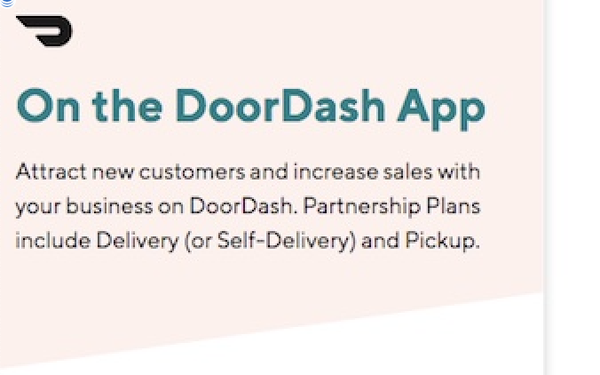 After “listening to our merchant partners,” restaurant aggregator and delivery service DoorDash has revised its commission and fee structure as the money-losing company continues to expand beyond food delivery.

DoorDash said it will allow restaurants to pick from three rates, setting commissions at 15%, 25% or 30% of every order, as reported by The Wall Street Journal.

While big restaurant chains have been able to negotiate commissions as low as 15%, many small establishments have paid up to 30%.

“This is us listening to our merchant partners and making adjustments,” the Journal quoted DoorDash COO Christopher Payne as saying during an online briefing on Monday.

DoorDash has not posted details of the virtual event on its website. Marketing Daily reached out to the company seeking a transcript but had not heard back by deadline.

Restaurants have long complained not only about the commissions and fees charged by third-party delivery services—but also how those services operate.

As reported last week, Grubhub just settled a lawsuit in which it was accused of falsely advertising that non-partner restaurants were closed or not accepting orders so that Grubhub could steer people to its partner restaurants.

Legal wrangling in the delivery space isn’t restricted to restaurants.

Last month, DoorDash alleged that Olo, its technology provider since 2017, had been charging DoorDash fees higher than Olo received from comparable delivery platforms, despite initial assurances to the contrary.

In a March 30 filing in New York Supreme Court, DoorDash said that Olo had “cheated its largest business partner” by failing in its promise that fees charged to DoorDash “shall be no higher than for any other comparable or competitive delivery platform provider.”

DoorDash said it found out about the alleged fee discrepancy—totaling “tens of millions of dollars” more than it should have paid—after acquiring former competitor Caviar in November of 2019.

Last Thursday, DoorDash and Olo issued a news release to announce a new, multiyear agreement and the settlement of DoorDash’s legal claims. Specific terms of the settlement were not disclosed.

With roughly a 50% share of the U.S. food delivery business, DoorDash has been expanding to other consumer goods as it grapples with state-by-state regulations limiting the commissions and fees that it can charge.

In a letter to investors on Feb. 25, the company said it operated under such “price controls” in 73 U.S. jurisdictions in the fourth quarter ended Dec. 31—up from 32 in Q3.

In 2020, the company expanded its Marketplace vertical offering to convenience and grocery stores.