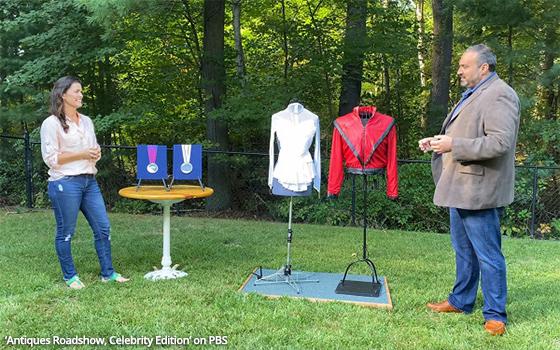 For years, the primary focus of “Antiques Roadshow” has been the hordes of ordinary folk who turn up at the show’s regional tapings in the hopes of hearing profitable news about items they have long owned but knew nothing about.

This week, however, starting Monday, “Antiques Roadshow” goes on a celebrity binge for three weeks with episodes filmed far away from the usual settings seen on the show -- namely, the spacious indoor event venues where people line up at the appraisers’ tables clutching their tattered first editions and cuckoo clocks.

Instead, the segments on view for the next three weeks were filmed in or outside the homes of celebrities (some of whom will be more familiar to many than others).

To give the producers of “Antiques Roadshow, Celebrity Edition” their due, they start Monday night’s episode (which was previewed by the TV Blog last week) with an explanation for their decision to jettison the show’s usual format in favor of these celebrity segments.

To summarize: According to the explanation, the year of COVID-19 lockdowns prevented the show from staging its usual regional appraisal events (from which the show’s episodes are traditionally built) because, obviously, crowded events such as these were incompatible with the  pandemic.

As a result, the producers hit on the idea of meeting various celebrities at their homes, one-on-one and at a social distance. This would enable the show to make new episodes in such a way that crowd control in a pandemic would not be an issue for them.

That explanation is perfectly reasonable. But it also makes you wonder whether these kinds of one-on-ones might just as easily have been arranged with the kinds of ordinary people who are the show’s bread and butter.

On the face of it, resorting to celebrities is something some shows should avoid because it has the effect of shunting ordinary people off to the side.

While no one should expect “Antiques Roadshow” to permanently become “Celebrity Antiques Roadshow,” another PBS show -- the family-history show called “Finding Your Roots with Henry Louis Gates Jr.” -- strictly upholds a “no ordinary people” policy as it focuses exclusively on the family histories of the famous, as if Prof. Gates would not be caught dead in the company of unfamous folk.

Over the years, numerous other shows have also been bogged down by occasional bouts of celebrity-itis. Game shows with celebrity contestants come foremost to mind.

And so does the occasional quiz show whose long-time and much-beloved host passes away, and then the show spends months and months subjecting the show’s audience to a dozen or more “celebrity” guest-hosts who draw attention away from the people who matter most on the show -- the contestants. Yes, this refers to “Jeopardy!,” obviously.

Having said all that, this week’s inaugural “Celebrity Edition” of “Antiques Roadshow” does have its moments.

Among the celebrities seen in the one-hour show are S. Epatha Merkerson, golfer Dottie Pepper, U.S. Olympic skater Nancy Kerrigan (seen in the photo above with her Olympic medals and skating outfits) and Jay Leno.

The Leno segments are the standouts of the show, and they have nothing to do with his famous car collection in a repurposed airport hangar in Burbank.

Instead, the segments were filmed in and around an eye-popping oceanfront estate in Newport, R.I., that Leno, by his own admission bought on a whim as a second home for $13.5 million one day in 2017. This place has to be seen to be believed.

But therein lies the difference between the celebrity participants on “Antiques Roadshow” and the ordinary people who flock to the show’s appraisal events.

In some of the show’s most memorable segments, some unsuspecting “Roadshow” visitors have had the good fortune to hear from an appraiser that the object they have toted to the show is worth in the tens of thousands of dollars or more -- news that can potentially be life-changing for them.

By contrast, when an appraiser tells Leno that a large (and quite beautiful) neo-impressionist painting hanging prominently in his Rhode Island mansion (a painting Leno professes to know nothing about, since it simply came with the house along with all the other furnishings) is worth between $100,000 and $150,000, Leno -- a man who buys million-dollar cars and mansions on a whim -- seems totally unaffected by the news.