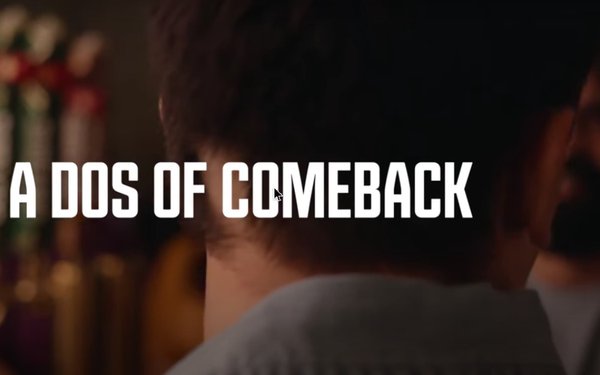 So much has changed for beer marketers in the last year -- and a new ad campaign from Dos Equis seems to be celebrating getting back into the normal social swirl.

Its new commercial, “A Dos of Comeback,” imagines party-goers who just started spring training for the regular season at bars. They’re out of shape: He can’t button his pants past those COVID pounds. She bounds down the front porch ready to go clubbing -- but wearing house slippers. (In a still from the commercial, above, notice the peninsula his do-it-yourself haircut created on the back of his head.)

The new Dos Equis spot shows up while the Heineken-owned brand is gearing up for the Cinco de Mayo boozy holiday that takes place Wednesday. As Ali Payne, vice president of marketing for the brand, points out, this is the week Dos Equis sales usually overindex by 30%.

Payne is aware of how briskly Dos Equis is selling this year. The brand uses MikMak, an ecommerce accelerator many liquor brands also use, to observe its sales to the growing segment of drinkers who now have their beer delivered by services like Drizly, Instacart or Walmart.

Such services are changing the beer and liquor world.

For example, while many consumers may believe beer shopping for Cinco de Mayo begins, at the earliest, on Cuatro de Mayo, MikMak founder and CEO Rachel Tipograph knows better.

According to the MikMak Shopping Index, “Alcohol purchase intent for Cinco de Mayo saw its first incline starting 4/21, reaching a peak two days later on Friday, 4/23, at 16%. This is a 3.3x increase from the average we saw in April. We expect to see one more peak in purchase intent next week as consumers make last-minute purchases closer to the event date.”

The shopping index is a measurement of more than 250 ecommerce key performance indicators that helps MikMak understand online shopping behavior.

There’s diversity in consumer preference this year for Cinco de Mayo, including beer, whiskey, vodka, and liqueurs -- and even the emergence of hard kombucha as a growing popular category.

Tipograph says, with great assurance, that prior to the pandemic, ecommerce for beer and alcohol was a trickle. Now it’s Niagara Falls and that retail gusher is not going to weaken as the pandemic does.

“People feel so-o-o comfortable buying their booze online,” she says, and by now her company has collected online buying patterns for many other consumer products. MikMak gets pretty granular, too. Discussing trends in various regions of the country, she says that these days, “People in the South are drinking!!!”

Payne says Dos Equis has experienced a 600% shift to ecommerce and 200% growth with Instacart sales.

With the pandemic, another change is evident. Most states loosened liquor laws and began allowing takeout liquor and beer sales from restaurants. Payne says, “Now when people order delivery from Buffalo Wild Wings, they can order a 5-liter keg,” which is equivalent to 10 pint-sized glasses.

One of the biggest changes in the business, Payne says, is that there’s any change at all. Before hard seltzers and the hardship of the pandemic, “the beer business didn’t have much news. There was not much innovation. Now, there’s a health and wellness trend and a lot more flavored beer.”