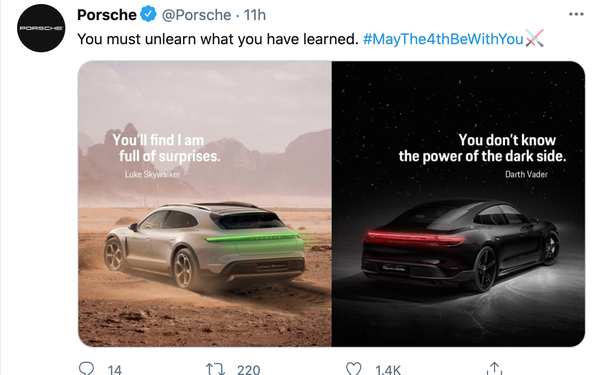 May 4, otherwise known as #MayThe4thBeWithYou or “Star Wars Day,” has attracted a bevy of brands this year across categories.

Even Google is getting in on the action. Searching for "Star Wars Day" results in movie-themed confetti falling from the top of the computer screen.

Porsche’s Twitter post includes images of its Taycan Cross Turismo and Taycan Turbo along with quotes from Luke Sykwalker and Darth Vader.

Several brands are simply using the “holiday” to post a fun brand photo that aligns with some element from "Star Wars," along with the hashtag #MayThe4thBeWithYou.

The U.S. Navy has a drawing of Baby Yoda wearing a U.S. Navy uniform.

The travel category seems to be most on top of the day, with social media posts from Spirit Airlines, Expedia, United Airlines and Ryan Air.

Robots are a big deal in the "Star Wars" franchise, and Intel is using the day to highlight how neuromorphic technologies and AI with EQ are changing the game in robotics.

United Airlines shows off two of its "Star Wars"-themed planes and asks fans to like the tweet for the light side and retweet for the dark side.

Ryan Air posted a tweet of marshallers using light sabers in place of the illuminated or red beacons they are often seen wielding near the external gates where planes are parked.