Musk's 'SNL' Performance Was Anything But Electric 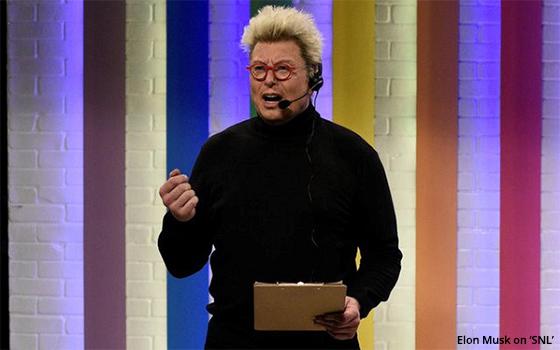 Evaluating Tesla tycoon Elon Musk’s “performance” as a comedic guest host on “Saturday Night Live” this past weekend is a useless, futile exercise.

Not surprisingly, the electric-car entrepreneur came across as awkward and amateurish, as anyone would be who has no prior experience in the world of comic acting, much less doing it on live television -- even a widely acknowledged genius such as Musk.

It feels appropriate at such times to give a non-performing celebrity like him a pass. Nobody expected Musk to put in a great performance anyway, since his presence as the show’s guest-host was obviously what you might call a novelty booking.

Such bookings are few and far between on “SNL.” In fact, the last one that might be considered comparable to Musk was Donald Trump’s guest-hosting stint in November 2015, just a few months after he announced he was running for president.

For the record, here is how the TV Blog’s review characterized that show back in 2015: “What a festival of time-wasting idiocy that show was … What a mess, what a dud, what a flop.”

Of course, Trump was then (and still is) a lightning rod for controversy and commentary -- i.e., strong opinions either pro or con.

Musk, on the other hand, is not a politician and not at all the kind of polarizing figure that Trump was, and still is.

On “SNL” this past weekend, Musk came across as one would have expected he would -- like an amateur who did his best, and in the process, had a lot of fun doing it.

He was so wholly inexperienced in this kind of live-TV performance environment that there were times when a viewer had to struggle to understand what he was even saying.

But I also felt that way when trying to decipher some of the lines delivered by the show’s much more experienced players that were just as inaudible.

Suffice it to say that some of the bits they cast Musk in were better than others. The worst one was probably the spoof of an Icelandic talk show in which Musk played the show’s offscreen director (pictured above) who was shown periodically professing his love for the talk show’s unhinged hostess.

This sketch was probably the worst one in the entire show, and had me wondering for the thousandth time why this show relies so often on talk-show spoofs. I concluded long ago that the talk-show spoof is something a sketch-comedy show trots out when they absolutely cannot think of anything better to do -- which at “SNL” is a frequent occasion.

Musk’s awkwardness and inexperience was most evident in his opening monologue. This was a portion of the show in which much of what Musk tried to say came out garbled or mumbled.

In addition, he issued a pair of O.J. Simpson jokes (obviously not written by him, but by the “SNL” writers) that were so tasteless that they undermined the entire segment.

The best of the Musk bits may have been his appearance during “Weekend Update” in the role of “Lloyd Ostertag,” described as “Weekend Update’s” financial expert.

All in all, it was an “SNL” not unlike so many others -- basically, 90 minutes in which the participants in the show’s sketches -- the cast and their guest-host -- are having a heck of a lot more fun than the rest of us watching at home.

On this particular evening, the only real authentic show-business professional was the show’s musical guest, Miley Cyrus.