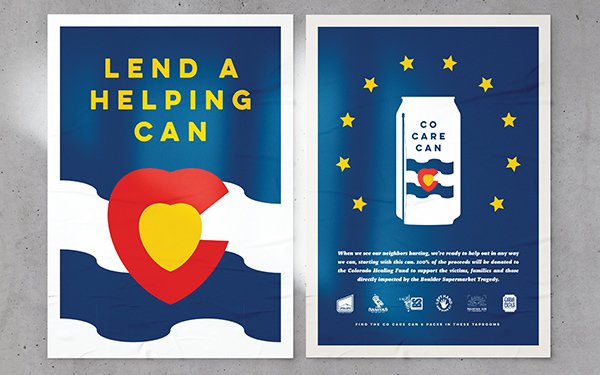 Fortnight Collective has launched a relief effort--CO Care Can--a coalition of local Boulder breweries to support The Colorado Healing Fund (CHF), helping those directly impacted by the mass shooting in March at a Boulder supermarket.

All proceeds from a limited-edition can of beer will go to support CHF which was created in 2018 to assist local Colorado communities with the financial, emotional and physical needs of victims of mass tragedies in the state.

As lead agency, Fortnight Collective brainstormed and ideated with the breweries on fourteen creative design ideas, all within a matter of days. Ultimately, the design representing the Colorado state flag at half-mast along with ten stars in a circular pattern to represent the ten victims was selected as the final decision.

“While we can’t take the hurt away after this tragedy, we know how important it is to come together to show compassion,” says Andy Nathan, CEO of Fortnight Collective. “Through this design, we wanted to communicate our respect for the victims and give back to them, while also empowering our tight knit community which comes together in the face of tragedy.”

The CO Care Can will be available at the taprooms of participating Boulder breweries, including Left Hand Brewing, Sanitas Brewing Co., Bootstrap Brewing Co. and Mountain Sun Pub & Brewery, and will also include a QR code to take consumers directly to the Colorado Healing Fund. Tote bags with a similar design will also be sold at the taprooms with all proceeds going to the CHF.