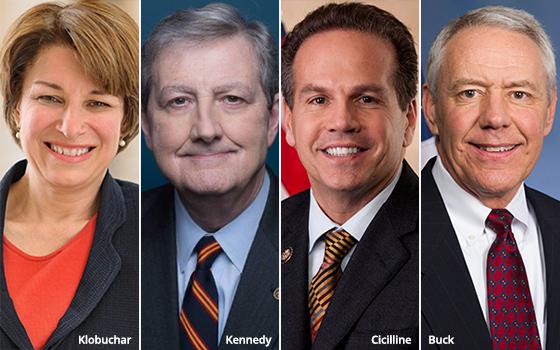 The news industry group News Media Alliance is planning a lobbying push for a bill that would allow news organizations to band together to negotiate with Google and Facebook.

The organization said Monday the effort will involve hosting virtual meetings between lawmakers and publishing executives.

The initiative is aimed at convincing lawmakers to pass the Journalism Competition and Preservation Act of 2021, which was re-introduced in March by Senators Amy Klobuchar (D-Minnesota) and John Kennedy (R-Louisiana), and Reps. David Cicilline (D-Rhode Island) and Ken Buck (R-New York).

The bill would grant a four-year antitrust exemption to news organizations (including print, television and online companies), in order to allow them to negotiate collectively with online platforms that draw at least 1 billion monthly active users.

Previous versions of the bill were unsuccessfully introduced in 2019 and 2020.

Supporters argue that the bill will boost the news industry -- particularly newspapers, which have seen significant drops in ad revenue in the last two decades.

By one well-publicized estimate, newspapers' ad revenues declined from $49 billion in 2006 to $16.5 billion in 2017. (At least some of that decline appears to be attributable to the growth of Craigslist and other online classified listings.)

Klobuchar stated when she proposed the law that it would “improve the quality of reporting and ensure that journalists are able to continue their critical work.”

David Chavern, president and CEO of the News Media Alliance, testified at a House hearing in March that the bill is needed in order to combat Google and Facebook -- companies he described as wielding “unconstrained monopoly power over news media organizations.”

“In the face of dominant intermediaries, it is unconscionable to prevent publishers from working together to fight for their own future,” he stated in his written testimony.

Chavern also argued that the traffic that Google and Facebook drive to newspapers' own sites doesn't provide the news companies with enough revenue.

“Google and Facebook benefit greatly from the high engagement around news content and are also able to use that content to mitigate their own problems with misinformation,” he stated. “They then claim to pay for these benefits with low-value traffic. As too many people have learned over the years, clicks certainly do not support professional journalism.”

Others, including prominent journalist Jeff Jarvis, a journalism professor at the Craig Newmark Graduate School of Journalism at the City University of New York, oppose the proposed law.

“To grant newspaper owners an exemption from antitrust, as has been discussed, would be profoundly anti-competitive,” he said in a written statement to lawmakers.

He added that such an exemption could “entrench the interests of the largest companies on both sides of the table, media and technology.”

Last October, Google said it would pay publishers $1 billion over a three-year period. Facebook, also, has said it will invest $1 billion in the news industry.

Even if Congress grants newspapers an antitrust exemption, it's not clear what impact the move would have on how Google and Facebook distribute news stories, given that U.S. courts have ruled in other contexts that Google's display of snippets of text doesn't violate copyright law.

For instance, in one high-profile dispute, the 2nd Circuit Court of Appeals said in 2015 that Google's book-scanning project, which involves digitizing books and displaying snippets in the search results, is protected by fair use principles.