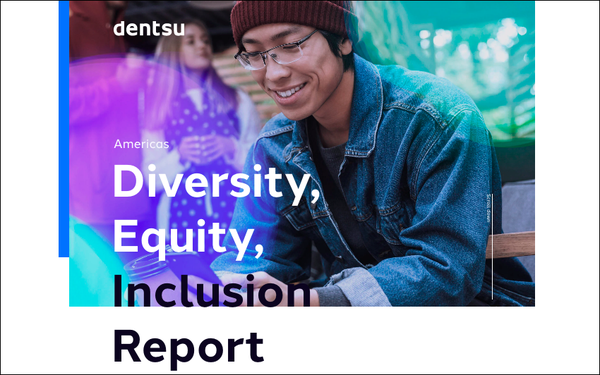 Dentsu Americas released a comprehensive diversity, equity and inclusion report today measuring progress and initiatives over the past year.

The company reported “slight increases” in the diversity of its hiring throughout 2020 and into 2021, with women accounting for 60% of Americas hires and multicultural representing 33% of US hires.

The company said it is also working to have a more diverse candidate pool from all underrepresented backgrounds, including LGBTQIA+, differing ability levels, military and veterans.

Women represent 58% of the Americas region workforce, for identified data, up 4% from last summer.

U.S. multicultural or BIPOC representation (Black, Indigenous, Asian, Latinx and Hispanic, Two or More Races and other) is 27% of the firm’s identified workforce data, up 2.6% from June 2020.

The company credits the improvements to ongoing and new DE&I initiatives including “building a more diverse [hiring] pipeline.” The goal: At least 30% of the U.S. workforce being BIPOC by 2025.

Pyle states in the report that transparency and accountability, representation and sponsorship, education and continuous learning and client and community impact are the “pillars” guiding the company’s DEI efforts. “While there is more work to be done, we are proud of the progress that we’ve made so far in collaboration with our people, clients and partners.”

Women of color account for 15.9% of the U.S. workforce with men of color at 11.1%. Among the executive ranks BIPOC representation is up to 20.1% from 16.9% in June 2020, with increases in Black and Asian, which the company said exceeds its 2021 goal. By 2025 the company’s goal is to have at least 25% BIPOC in executive roles with a more equal distribution among men and women, who are currently less represented.

BIPOC employees represent 29.6% within professional ranks, up 1% over the past year. Management ranks are 19.7% BIPOC, also up 1%.

As part of its DE&I effort Dentsu has imposed greater accountability metrics at the executive level which are tied to broader performance assessments. Starting last July, there are now both quarterly and annual DEI reviews.

The report also addresses a number of partnerships—new and existing—that are helping to drive the company’s DEI goals including alliances with 4A’s MAIP, AAF MPMS program, adfellows, COOP and One Club’s ONE School. Pyle herself is an alumna of MAIP, which she noted during a press briefing was testament to the power of mentor and internship programs when implemented effectively.

One example of a new partnership: Merkle has launched a first-of-its-kind alliance with Howard University whose School of Business faculty will work with Merkle’s professional experts to develop leading-edge database technology and consumer marketing curricula for four courses in the marketing and information systems and supply chain management departments. Its designed to give students a fresh perspective on current marketing industry standards. Merkle will also support the School of Business’s programmatic strategies through various activities, including a summer boot camp.

The company has also focused on the suppliers its works with and has set a goal 15% of spending to be with diverse suppliers including businesses owned by women, BIPOC, LGBTQIA+, persons with a disability and Veterans.

Dentsu International has also joined The World Economic Forum’s Racial Justice in Business initiative and says that to date it is the only holding company (or agency) to do so among the dozens of members representing about 6.5 million employees.