To The 'Manor' Born: Original Meerkats Mark Their Territory 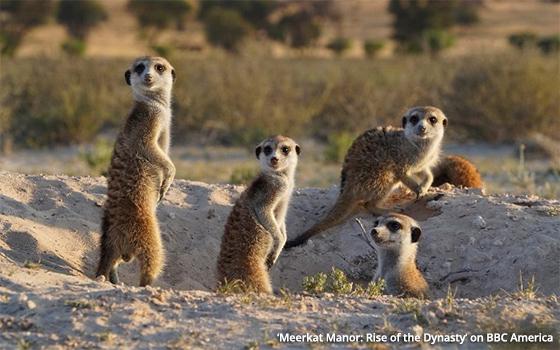 Now we know why Discovery decided to find its own meerkat reality show rather than revive the original “Meerkat Manor” brand that once aired on Discovery-owned Animal Planet: Someone beat them to it.

That someone appears to be BBC America, which joins the current meerkat fray with a “Meerkat Manor” of its own -- “Meerkat Manor: Rise of the Dynasty,” premiering June 5.

That will be just under a month after Discovery’s new meerkat show, “Meet the Meerkats,” began streaming on Discovery+.

The TV Blog wrote about this new show last Friday, but since then, the existence of a revived “Meerkat Manor” came to light just this week.

And as the TV industry’s widely acknowledged (and hailed) “TV Blog of Record,” we felt it was appropriate to bring you this update on TV’s sudden, revived interest in the lives of meerkats.

If Discovery was unable to recapture the “Meerkat Manor” title, the company did at least beat BBC-A to the air in what is shaping up as a bilateral meerkat melee.

Not that the casual viewer will be able to tell the difference. The new “Meerkat Manor” is much like the old one, and also much like “Meet the Meerkats” on Discovery+.

The only real difference is that “Meerkat Manor” can lay claim to a family connection to the old show that might endear it to fans of the first “Meerkat Manor.”

This new one sets itself up as being directly descended from that show, specifically from the female meerkat named Flower, the famed matriarch of the original show (and now deceased).

In addition, the new “Meerkat Manor: Rise of the Dynasty” is even being positioned by BBC-A as a fifth season of “Meerkat Manor,” whose original run ended after four seasons 13 years ago, in 2008.

Like the old “Meerkat Manor” and “Meet the Meerkats,” the new BBC-A series focuses on two families (known as “mobs” or “gangs”) of meerkats.

They live in two distinct but contiguous meerkat communities in the Kalahari Desert of South Africa, the same place where “Meet the Meerkats” is filmed. One wonders what this scene is like in this nature preserve, with all these meerkats under siege from the nature paparazzi.

In the new show, as in all the others, we see the meerkats interacting playfully with each other, warning each other about the presence of predators, and foraging for food, which for them consists of an array of crawling creatures such as giant millipedes and huge insects.

It is pretty amazing that there are now two meerkat shows more or less in competition with each other. Even at the height of the meerkat craze in the ’00s, there was still only one meerkat show.

The TV Blog does not exactly relish writing about meerkats once a week, but if a third meerkat show does turn up someplace else anytime soon, please rest assured that we will take up the responsibility of reporting on it.