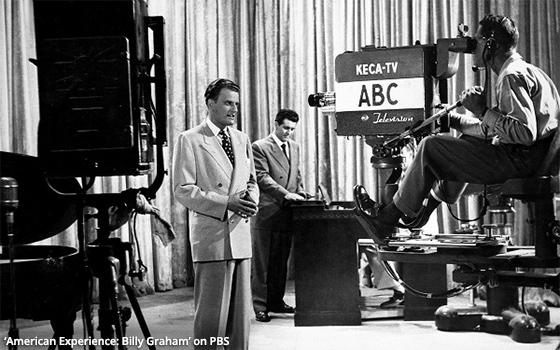 The Reverend Billy Graham emerges from a new two-hour television documentary about his life as a towering, heroic figure of 20th-century American history.

The documentary -- premiering Monday night (May 17) on “American Experience” on PBS -- makes the point that Graham’s meteoric rise to national fame in the 1950s paralleled the rise of television, and positions him as one of the new mass medium’s seminal pioneers.

Born in a farmhouse near Charlotte, North Carolina in November 1918, Graham lived just shy of a hundred years (he died in February 2018).

Through most of his life, he was one of the most famous men on Earth, preaching a simple message of salvation through Jesus Christ from which he never wavered.

As one who makes his living writing about television, I would have preferred a documentary that clung more closely to the history of Graham and his television ministries, for he was an innovator in this particular form of television that is still with us today.

The documentary, subtitled simply “Billy Graham,” focuses for a time on Graham’s embrace of mass media as he grew his ministry from revival meetings in tents to national radio and television, through which he reached audiences in the tens of millions every week.

The documentary describes the Graham media empire of the mid-1950s as highly sophisticated and professional.

Before becoming a minister, Graham was a door-to-door salesman for the Fuller Brush Co., where he learned sales tactics and strategies that he never forgot.

By the 1950s, Graham and his team were applying modern-day advertising and marketing methods to spread his message and grow his ministry.

The documentary even includes a commercial that Graham made in which he looks straight into a camera and recites copy that could just as easily have been written to sell just about anything.

But most of the documentary is taken up with Graham’s political life, as he urged a succession of U.S. presidents -- starting with Dwight Eisenhower -- to help him promote his vision of America as a God-fearing, believing nation.

The documentary notes that Graham’s reputation was tarnished by his support of Richard Nixon, whose friendship with Graham dated back almost 20 years before Nixon was first elected president in 1968.

But as this documentary demonstrates, Graham’s worldview, and his preaching, were almost overwhelmingly on the right side of history throughout his life.