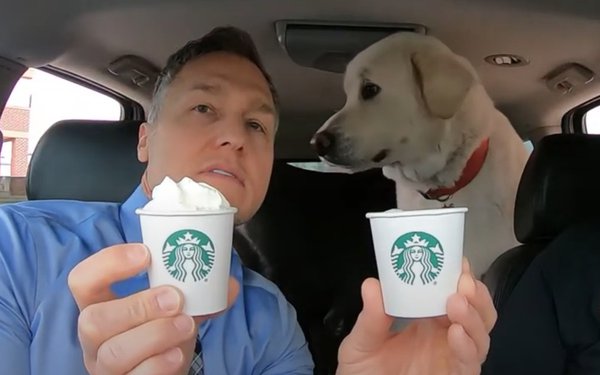 Still from a video by comedian and lawyer Wes Austin.

Is Starbucks officially going to the dogs?

Long known for giving free whipped cream to canine owners as a pet treat, Starbucks Corp. earlier this month submitted an application with the U.S. Patent and Trademark Office to trademark the term "Puppuccino."

According to the application, the term would apply to milk-based beverages, whipped cream and pet bandanas.

The news was first reported by Business Insider.

It comes as no surprise to dog owners who are used to requesting extra whipped cream in an espresso or sample-size beverage cup for their pooch.

In fact, the Starbucks Secret Menu website—created “by fans for fans”—says anyone can “ask for a Puppuccino” and that “baristas are always happy to oblige.”

A Starbucks rep told Business Insider that “we’ve seen customers order this for their dogs” while recommending that “pet owners consult with their vet on what treats are best for their pet.”

Given Starbucks’ trademarked Frappuccino beverages, the company contested the filing, claiming it would cause confusion—as explained in this video by patent attorney and comedian Wes Austin.

Marketing Daily reached out to Starbucks and Heiberg to determine the status of their filings but had not heard back by deadline.

If Starbucks begins selling Puppuccino-branded pet bandanas, it would be making good—albeit in a very small way—on its 2019 April Fool’s prank.

Starbucks’ U.S. financial performance continues to improve, as evidenced by a Q2 comparable-store sales increase of 9% for the period ended March 28. That followed a 5% decrease in Q1.

According to place-based data provider Placer.ai, weekly visits to Starbucks locations in California were down about 15% year over year in the week beginning April 5 and roughly 20% in New York.

During the same week, visits to Starbucks stores were up 20% in Florida and 14% in Texas.