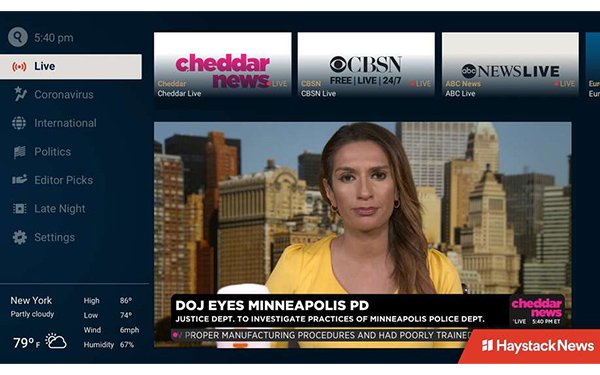 AVOD Haystack News is now tweaking its association with Cheddar News, the network focused on tech and finance. Though Cheddar has been on the streamer since 2017, it now joins Haystack’s live channel offerings.

Viewers can also access News 12 New York stories via Haystack’s on-demand service. It will be added to its live content slate later this year.

The additions are the result of an expanded content distribution agreement with Altice News, which includes Cheddar News, News 12 and i24NEWS, already on Haystack's on-demand platform.

Haystack is an OTT service that aggregates news sources and says its feed can be customized. It has various content partners, including Meredith Corp., Bloomberg, ABC News, CBS News, Newsy and Scripps.

Haystack TV is a free news app available on Amazon Fire TV, Android TV, Apple TV and Roku, as well as smart TV sets on Samsung and Vizio, among others. It’s also accessible on haystack.tv.

“Haystack recognizes the critical importance the News 12 brand has for tri-state area consumers in the Northeast, and we are very pleased now to expand our local news options,” said Daniel Barreto, cofounder-CEO at Haystack TV.

Altice USA is one of the largest broadband and video services providers in the U.S., claiming more than 5 million customers in 21 states.