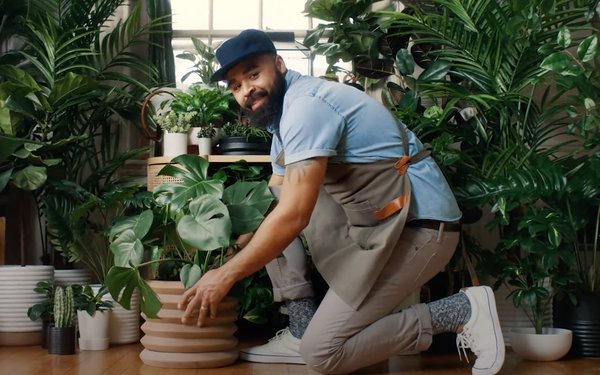 Enthusiastic shoppers, hot to spend in just about every category, helped Target shatter first-quarter forecasts. Total revenue shot up 23% to $24.2 billion, marking the fourth consecutive quarter of 20%-plus sales gains for the retailer.

Observers say the news demonstrates the strength of the retailer’s omnichannel positioning. But it also paints a picture of just how hungry Americans are for everything from houseplants (shown above in image from Target's collab with plant guru Hilton Carter) to summer clothes to sporting goods.

Target gained more than $1 billion in market share as consumers leaned into its increasingly sophisticated omnichannel offerings, with 75% of its ecommerce orders fulfilled at stores. Comparable sales at stores jumped 18%, while digital sales increased 50%.

The Minneapolis-based retailer says operating income hit $2.4 billion, up 407% from $500 million in the comparable period a year ago.

The results "showcased the power of putting our stores at the center of our strategy," Brian Cornell, chairman and chief executive officer, says in a conference call, webcast for investors. "For us, the distinction between a store sale and a digital sale is largely irrelevant."

The company saw an increase in number of trips and size of basket in every category. The biggest gain came in apparel, with sales up more than 60% from the same period last year. Target’s owned brands increased by 36%, the strongest jump that category has ever had.

The chain says it is working hard to stay abreast of these "new-normal" shopping trends. People "want to maintain some of the new habits and routines they formed during the pandemic," said Christina Hennington, Target’s chief growth officer, during the conference call, as recorded by The Motley Fool. That includes an enhanced focus on "the joy of home and health and well-being of their family."

Vaccines play an important role. "There's a rapidly emerging emphasis on style and mobility, as guests feel increasingly safe in public spaces," Hennington said. "That trend is playing out in an explosive demand for dresses and cosmetics, as well as luggage and categories based on being active like sporting goods and performance activewear."

Analysts think the stellar results are an indication that even as many retailers stumble, Target's store-driven strategy is what consumers are craving.

"Stores continued to be the linchpin of Target's online capability, once again validating management's strategic decision to position them at the center of its online flywheel, with ship from, in store-pick-up, and curbside all benefiting."