Investors Give Free Range To Plant-Based And Cell-Cultured Chicken 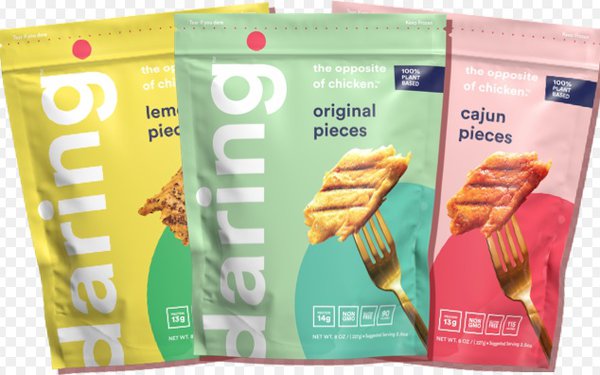 Chicken, an as-yet-undeveloped area of the plant-based and cell-cultured meat market, is coming into its own with new infusions of funding.

In addition, cell-cultured meat pioneer Upside Foods—known until recently as Memphis Meats—disclosed for the first time that Whole Foods Market and its CEO, John Mackey, have made investments in the company.

A year after Daring’s U.S. launch, the company secured $40 million in a round led by D1 Capital Partners and rap star Drake, among others.

Daring sells pouches of 100% plant-based-chicken pieces with 14 grams of protein per serving and non-GMO ingredients.

“The brand has a significant growth runway ahead of it, as the chicken market remains underpenetrated by plant-based products,” D1 Capital Partners investor Michael Tully said in a news release.

Good Meat corralled $170 million in new funding from UBS O’Connor and others as it prepares to enter the nascent, cell-cultured meat market in the United States.

That approval enabled Good Meat’s cell-cultured chicken to be used as an ingredient in chicken bites for sale in Singapore. On Monday, the company announced that a restaurant at the JW Marriott in Singapore was the first eatery to serve cultured meat.

Also ramping up for cell-cultured meat production and distribution in the United States is early cell-culture pioneer Memphis Meats—which recently rebranded itself as Upside Foods and explains the cell-culture process in this video.

As it seeks regulatory approval, Upside has broken ground on a pilot production facility in the San Francisco Bay area. The company says it will likely begin production of cell-cultured chicken by the end of 2021.

New investor Whole Foods CEO John Mackey had something to say about the company. “Upside Foods is meeting [consumers] at the center of their plates with meat they can feel good about,” Mackey notes in a statement posted on Upside’s website. “This has the potential to revolutionize the way people eat, which is why I’ve personally invested in the company.”