What's Right - And Wrong - With AVODs 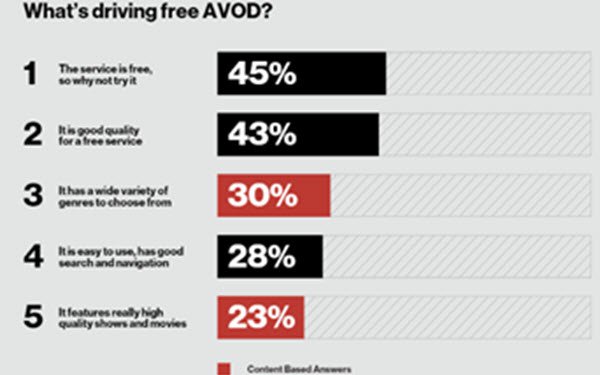 Ad-supported streaming services, aka AVODs or FASTs, are the darlings of the media world now, with good reason.

Their strengths — along with some weaknesses on the advertising front — are documented in a new report from Verizon Media and Publicis, “Capitalizing on the CTV Opportunity.” The report is based on a nationally representative survey of 3,000-plus U.S. TV viewers, fielded between Feb. 1-11.

The results underscore the reasons for growing adoption of ad-supported services.

While 71% of respondents described paid/premium SVOD as their current “go to” service, 48% said they worry about the costs and are sharing log-in credentials to save money.

At the same time, 61% agree that they’re more aware of AVOD offerings than they were a few years ago, and half say they’re interested in ad-supported streaming services.

More than three-quarters (77%) report already seeing ads across cable, live or AVOD services; 66% report seeing ads on AVOD services of any kind (free or paid); and seven in 10 say that paid, ad-supported streaming services are worth the price.

Forty-three percent say that free ad-supported services offer “good quality"; 30% agree that they offer a wide variety of genres from which to choose; 28% say they’re easy to use and have good search and navigation; and 23% say they feature “really high-quality” shows and movies.

The “but”: 39% of AVOD subscribers have considered ad-free alternatives.

Sixty percent cite overly long ad breaks as an annoyance, and the same percentage say there are too many ad breaks.

Nearly as many (58%) complain about seeing the same ad repeatedly during the same show or consecutive shows they’re watching.

And 53% say commercials that occur in the middle of the action of a show, in a moment that’s not a natural break in the action, are “the worst.” Which may explain why 54% of those who have both AVOD and cable say that cable ads are less frustrating.

Possible fodder for solutions for creating a better ad experience: 54% say a countdown clock indicating how much time is left in an ad break would help; 67% that they would prefer just one or two ad breaks during programming; and 62% that putting breaks only at the beginning and end of a program would be optimal.

In addition, 53% say they would prefer ads that are more relevant to them.