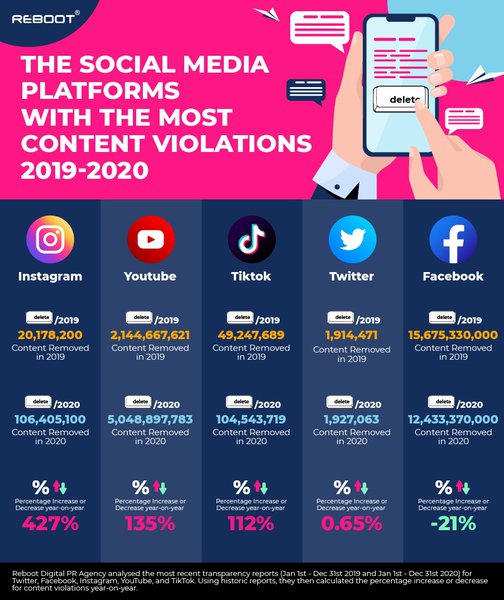 Ooh, naughty Instagram. In 2020, the social media platform showed an 86% increase from 2019 in removals of “adult nudity and sexual content,” according to an analysis by U.K.-based digital marketing agency Reboot. This was a much larger uptick than sister platform Facebook, which had only 15%. (Though Facebook substantially led Instagram in total amounts of removed content for 2020, with 139.9 million posts, comments, etc., versus Instagram’s 45.1 million.)

But a rise in content removals isn’t an “inherently bad thing for social media platforms,” notes a spokesperson for Reboot.  It “shows a step up in the monitoring of inappropriate content and gives a view of how platforms are making social media a much safer environment for everyone.”

To get its figures, Reboot’s digital PR team analyzed data from recent publicly released transparency reports from Twitter, YouTube, Facebook, TikTok, and Instagram.  Among other info, these reports detail how the platforms are tackling violations of their terms and conditions, and provide stats on removal of content that includes posts, comments and, for some platforms, videos.

For "dangerous orgs: terrorism," the jump in removals YoY was 17%. Per removals of fake accounts, Facebook showed an 11% decrease, from 6.5 billion to 5.8 billion. Then there’s hate speech, which registered a whopping 291% jump YoY in removals, from 20 million to 81 million.

However, Reboot's list of Facebook and Instagram's categories of removed content don’t include what Reboot calls “one of the biggest contributors to content demonetization and removal from social media platforms, especially in the case of influencers: copyright violations.”