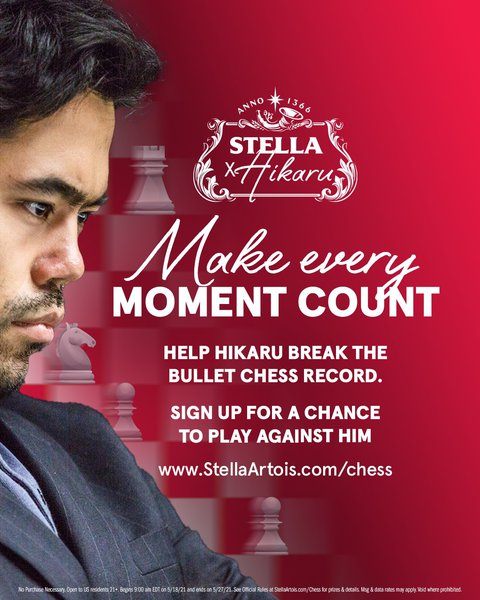 Stella Artois, Anheuser-Busch’s Belgian beer, is partnering with Chess Grandmaster Hikaru Nakamura in an attempt to break his Chess.com record for opponents defeated in an hour of bullet chess.

In bullet chess, matches last for up to a minute.  The current record is 32 wins.

All challengers for Nakamura’s record attempt will come from chess aficionados signing up at StellaArtois.com/Chess through May 27. The event itself will stream live on Chess.com/TV and Hikaru’s Twitch channel on June 1, at 5 p.m. ET.

Both Stella Artois and Nakamura have been promoting this “Bullet Chess Speedrun” via social media.

The brand will also award its own limited-edition chess boards and chalices to fans who comment in the Twitch chat during the Speedrun using “!StellaChessGiveaway.” The more matches Nakamura wins, Stella says, the bigger the prizes will get -- with one spectator set to receive  a Nakamura-signed chess board.

Remaining Stella chess boards and chalices will then go on sale starting June 2 at ShopBeerGear.com.

Beer and chess, or at least Stella and chess, are a natural fit, according to Lara Krug, the brand’s vice president of marketing. “Chess is such a beautiful game where the moves are savored and appreciated by the players -- much like our beer,” she told Marketing Daily.

And this tie-in may not mark the end of Stella’s association with Nakamura. “While nothing is final yet,” Krug said, “if Stella Artois and Hikaru are able to smash the Chess.com record for most unique games of bullet chess won in an hour, there’s no telling what we can do together in the future. Fans will have to follow us on social to see what our next chess move will be.”

Interest in all things chess has surged over the past year due to a combination of the pandemic and the hit Netflix series, “The Queen’s Gambit.” But even before those events, Statista had forecast that the North American chess industry would be worth $40.5 million in 2022.

Chess is one of the largest categories on Twitch, with Nakamura’s @GMHikaru the top stream, according to Twitchtracker.